How do i make a tesla coil

Next setup with IGBTs

Jakob builds a Tesla transformer. As if we didn't have enough of it! But, the fact is that we have very small and very large ones in our collection. What is missing is a medium one that can also be operated in a seminar room with the appropriate performance. A thyratron for this performance class is a little oversized. A circuit structure with IGBTs is recommended here. A search on the net for a circuit diagram actually resulted in something very unexpected. I was unable to find a circuit (with IGBTs) that can be called a Tesla transformer.

All circuits do not use the effect that the Tesla transformer makes to the Tesla transformer. And that is about the increase in resonance. The capacities that are used in the primary circuit are far too large. Simply put, they are somewhat larger switching power supplies. This can be checked very easily by changing the torus. If the spark length remains the same, the primary circuit and the secondary circuit do not run in resonance and only the transformer effect is used.

How our circuit looks now remains to be seen.

Who made the suggestion with the transformer is unfortunately no longer comprehensible, but this circuit is a resonant circuit (Meißner oscillator), and installing an inductance here is not a good idea. To convert the "Tesla transformer" into a controllable one, only a fast switch is necessary. Frequencies up to 10 kHz are no longer a problem and the music is easy to hear.

But in order to achieve a higher voltage and thus a greater volume, this type of circuit has reached its limits. Here, unlike the Tesla design, the excessive resonance is not used, but predominantly the transformer effect. Easily comprehensible by exchanging the torus and thus no change in the spark length is achieved. So with more power and IGBTs. Hopefully we won't overshoot again.

We can also be “small”. The wish was always expressed to demonstrate a singing Tesla transformer in seminar rooms. But since our "little one" only begins to live at 10 kV and already produces lightning strikes of 2 m, something smaller is needed. As a template, we have selected a construction proposal for an article by Heise: https://www.heise.de/make/projekte/Ungefaehrliche-Mini-Teslaspule-von-der-Maker-Faire-2013-2119974.html. This is a simple circuit with a transistor that should work with a power supply of 15 volts. The advantage here is the safe operating voltage and where a transistor has been installed, there is the possibility to control something.

With an operating voltage of 20 volts, it is possible to pull a 5 mm spark with a screwdriver. An energy-saving lamp already shows a slight glow at a distance of 10 cm. According to the motto “there is more in it”, we are increasing the supply voltage. You're welcome do not try this. Unless the Tip 41C is exchanged for a BU 508. 80 volts shouldn't be a problem. However, there is an alternating voltage of 600 - 800 volts on the collector. So be careful! Higher operating voltages are possible, but should be consumed with caution, especially if the two oscillating circuits are not properly matched to one another. The current increases and the result is a defective transistor. Sparks can now be 3 cm long (approx. 30 kV) and energy-saving lamps light up at a distance of 1 m.

The next step would be to modulate the base current. The simplest approach is to take an audio transmitter and insert it into the base line. We'll see !!!!!

As feared, we are already at discharges of 4.5 meters, although Sven has not yet carried out any fine-tuning. So far, only the 3 kV transformer has been installed, the 5 kV transformer is still waiting. A further renovation is still planned, but more on that later (music).
The construction of this Tesla transformer differs greatly from the usual interconnections, on the one hand it is a DC voltage circuit and the spark gap connects the charged primary capacitor to the primary inductance in parallel. The advantage here is that there are no short-circuit losses for the transformer, and thus all of the energy can be used.
In the last part of the video, a discharge struck directly from the secondary winding into the primary winding, causing the main fuses to switch off. 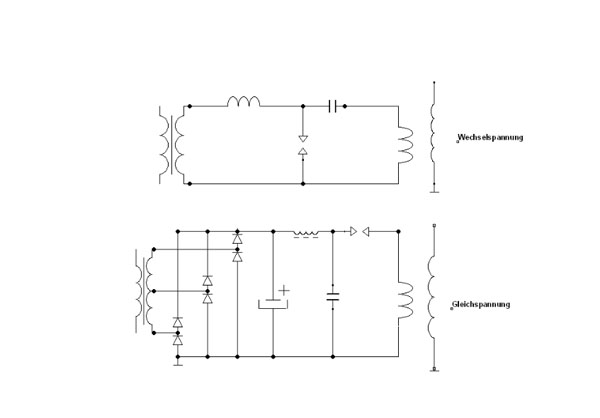 We did it. Ahhhh ... Dennis did it. He connected his electric guitar to the Tesla transformer. You can well imagine that it wasn't that easy, especially since the security aspect plays a major role. We have solved these problems with a galvanic (20 meter fiber optic cable) and a local separation, which also gives us the opportunity to hear a little more of Dennis playing the guitar.

And now in stereo

Here are pictures of our first converted Tesla coil. It is now possible to use a voltage of 20 KV without any problems, and thus generate lightning strikes of 3 meters. What will happen at 30KV?

Usually, singing Tesla transformers are built with great electronic effort. Anyone who has ever dealt with it knows that you don't just have to have good electronic skills. The mechanical structure also plays a not inconsiderable role. But the biggest problem is the MOSFETs. A little too much electricity, a rollover and 100 euros or more go up in smoke. We take a different approach and control the Tesla transformer with a hydrogen thyratron (max. Anode voltage 40KV --- max. Anode current 20000A), in connection with a high-performance laser power supply. The first setup with a cylinder primary coil already led to flashovers between the primary and secondary coil at 12KV. All isolation measures were unsuccessful.

One of the next projects is our large Tesla transformer. So far it has been operated with a rotating spark gap and its output cannot therefore be controlled. A complete power supply unit and control system are left over from a third laser.
The specialty of these laser power supplies is their controllability. As soon as the thyratron is activated, that means a short circuit for the power supply unit. This prevents the NT from being switched off at the moment of switching through. The process is very quick and limited to around 500 Hz. Exceeding this frequency only leads to overlapping of switch-on and switch-off processes and thus to an increased current consumption.
That all sounds logical and simple, but a Tesla transformer is something completely different from a laser and the road to a functioning Tesla transformer from these components is a rocky road.