Where does the insight come from

Show remorse: what do you really regret?

Understanding is the first step towards improvement. A well-known proverb that has a lot of truth in it. Mistakes are not inherently bad. You can learn a great deal from it, develop yourself and your skills further, and do it differently and, above all, better if you try again. Before that, however, there is usually a strong feeling of remorse. We painfully realize that we have done something wrong. Honestly felt repentance is not a pleasant feeling, but it is an important phase in which you can learn a lot about yourself ... 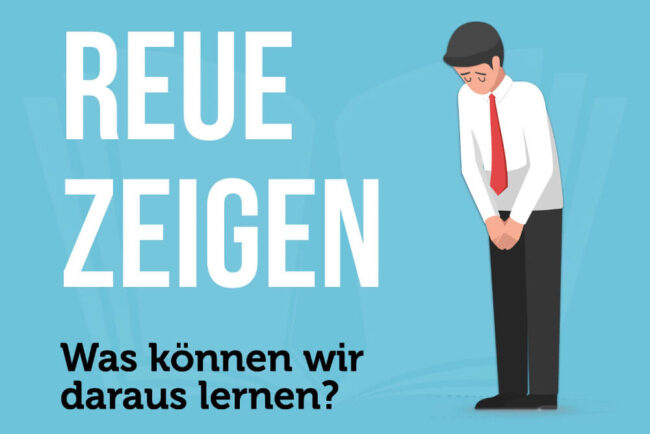 Repentance: What Can We Learn From It?

We don't always recognize immediately that we made a mistake. Sometimes time has to pass and we have to get away from the situation to get the clarity that something really went wrong. Repentance is understanding that comes too late once said the Austrian lyric poet Ernst Freiherr von Feuchtersleben. If the repentance then sets in, it usually hits it very hard. At one stroke we become aware of the mistakes we have made, that we may have harmed others or betrayed our own principles.

As uncomfortable as this experience is: The positive effects predominate. First there is the realization: You are able to question your own actions and decisions and do so critically with an eye for your own weak points and missteps. Even so, you have enough confidence to admit the mistake. That alone shows a solid personality. The easier way would be to fool yourself and others and claim that you have not made a mistake ...

Showing remorse means taking responsibility for your own actions. This is classy! And insight is the first step towards improvement. For the next steps, you need the courage to apologize and change something.

The 3 phases of repentance

True repentance is not a snapshot, it is a process. It usually takes place in three typical phases, which can be individually different and also differ from one another in terms of duration. Anyone who regrets an action, a decision or a mistake will still go through each of them:

Remorse and motivation - at first glance, both have little in common. But not true. There can be great motivation out of remorse: The motivation to make it up to you; improve yourself; not make a similar mistake again and really learn from it. The uncomfortable feeling of shame and remorse - towards others or towards oneself - drives so many people to top performance. What was previously empty talk is finally being put into practice. There is less pretense and more action. Because now you are much more aware of the consequences.

In fact, repentance can be motivatingbefore this occurs. Strictly speaking, this is the fear of later repentance. Those affected usually ask themselves “What would have happened if ...?” Nobody wants to look back on their life and realize that they have remained below their potential or have missed opportunities - out of fear or cowardice. And it is precisely this regret and the look to the future that can provide a real motivational kick.

Repentance: What do we regret on our deathbed?

When it comes to repentance, many people ask themselves at some point: What could I regret on my deathbed? For most of them, it's not so much the things that we have done, but rather what we have not done or dared. The palliative nurse Bronnie Ware did a more extensive research and summarized it in her book “5 things that the dying regret most”. She herself has accompanied many patients on their last journey and found that repentance often focuses on similar things. Most often the dying regretted that ...

Why we make mistakes that we later regret

A positive attitude and openness to changes and innovations are the best prerequisites for taking mistakes in a sporty way. Instead of disappearing into self-doubt, worries and fears, a mistake can be viewed from a new perspective. Suddenly it only seems half as bad and regret about the wrong decision becomes the engine for the future.

Why that doesn't happen anywayand we make mistakes that we later regret for two main reasons:

You may regret these mistakes later

Finally, we've put together a list of mistakes that most people might regret later on. Perhaps you will discover yourself in one point or another. Then you can prevent repentance by consciously doing it differently ...

The best repentance sayings and quotes

Nils Warkentin studied business administration at the Justus Liebig University in Giessen.On the career bible, he is devoted to topics related to studies, career entry and everyday office life.