Even on his 75th birthday and after nearly 60 years on stage, Eric Clapton's relationship with the public is not entirely clear. The singer and guitarist is considered shy. The hero cult that arose around him in the 1960s and 1970s and continues to this day is uncomfortable for him. On the other hand, the musician from the south of England still goes on tour, playing in sold-out halls in front of fans who enthusiastically celebrate each of his solos. His songs tell a lot about his life.

Born on March 30, 1945 as the third child of the family, Clapton grew up in the small town of Ripley in poor circumstances. It wasn't until late that he found out that his grandparents were raising him. When the boy asked his birth mother at a meeting at the age of nine if he could call her mom, she refused. Clapton describes this moment in his 2007 biography "Mein Leben" as the foundation of a decade-long feeling of rejection.

The young Eric takes refuge in the arts, especially in music: "Music became my healer and I learned to listen with all of my being," he writes in his book. He listens to his uncle's blues records: Chuck Berry, Robert Johnson, Big Bill Broonzy and B.B. King, with whom he was to record the joint album "Riding with the King" decades later.

The boy hangs in his grandparents' ears until they buy him a guitar that has to be cheap and therefore difficult to play. Eric watches his idols play the strings of their instruments on television, plays everything, copies every rhythm, every guitar lick. 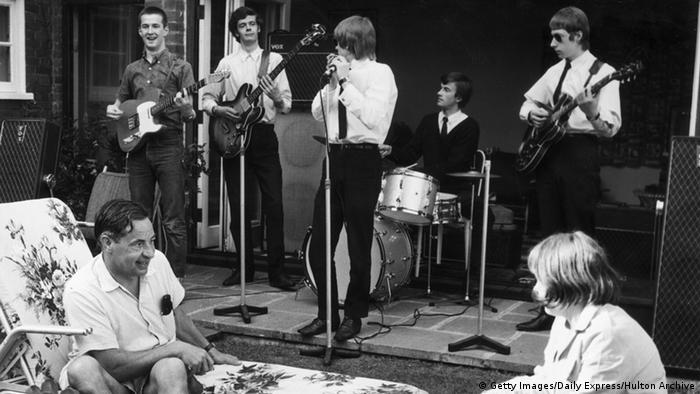 At the Yardbirds, Clapton (far left) became "Slowhand". Clapton left the band when it pushed into the mainstream

"Slowhand" because of broken strings

Eric is a fine spirit, interested in fashion and style at an early age, attended art school, which he dropped out in 1963 to become a musician. In order to earn money, he assists his grandfather, a bricklayer, but his first successes with the band Yardbirds soon follow. The nickname "slowhand" comes from that time: when Clapton broke a string on stage, the audience started clapping while he opened a new string.

His band mates make the name "Slowhand" out of this - but Clapton rarely played slowly back then: When Clapton starts a solo, he cuts the air with the strings. In his riffs he bundles a passion made of anger and pain, he spreads his emotions through his instrument.

When the Yardbirds management pushes the band more towards the mainstream, Clapton declines. At the age of 20, he doesn't want to emulate the Beatles, already superstars at the time. He leaves the Yardbirds to join the band of John Mayall, the father of British blues, shortly afterwards.

In the mid-1960s, a myth built up around Clapton in England, he was considered a musical genius, and it was sprayed on a house wall: "Clapton is God". He is always attracted to the new. With drummer Ginger Baker and bassist Jack Bruce he forms the group Cream, in which he appears as a singer for the first time alongside Bruce. Her style mixes blues with psychedelic rock, resulting in hits like "Sunshine of Your Love" and "Crossroads". 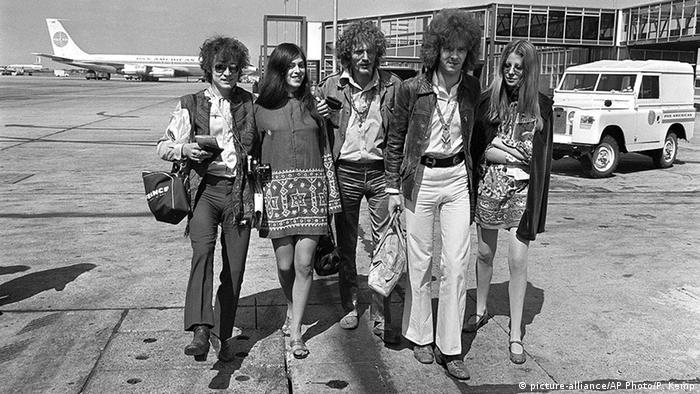 At Cream, Clapton also appeared as a singer. The mix of blues and psychedelic rock was considered a style-defining one in the 1960s. Jack Bruce (left), Ginger Baker (center) and Eric Clapton (2nd from right) can be seen here at London Heathrow in 1967

At that time everything was in flux in British rock music, there was an open scene, many jams together. This leads to a friendship with Beatles guitarist George Harrison, who asks Clapton to play on a track on the Beatles' next album: "While My Guitar Gently Weeps". In 1968 Cream disbanded, Clapton remained restless, founded the group Blind Faith with Steve Winwood, a star himself as organist and singer of the band Traffic. For the album recordings, Clapton cancels participation in a festival in the USA that is set to become legendary: Woodstock.

Clapton is a musical vagabond who quickly loses interest once he has tried something successfully. Cream has existed for three years, Blind Faith took off after an album and a tour, as did Derek and the Dominos. Behind this band, Clapton hides his famous name, he plays with them in small clubs, without any advertising, some viewers do not know beforehand that Clapton will be on stage. It's having more fun than it has been in a long time.

Reluctantly, Clapton finally agrees to at least promote the album "Layla And Other Assorted Love Songs" and to let the cat out of the bag with a slogan: "Derek is Eric". Record sales are not as important to him as the artistic aspect, he has already made enough money. He invests it in a property not far from his hometown Ripley, his first Ferraris - and lots of drugs.

As Derek, Clapton composed "Layla" in 1970, one of his greatest hits. In it, he describes his unhappy love for a married woman - Pattie Boyd, wife of his friend George Harrison. When he invited him to take part in his benefit concert for Bangladesh in New York, Clapton only agreed on the condition that a permanent heroin supply was guaranteed. His then, significantly younger girlfriend can no longer get out of this cycle and dies years later of an overdose. 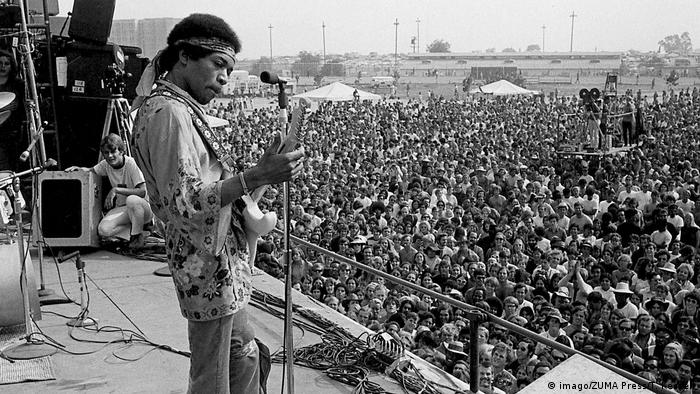 To this day, critics argue who is the best guitarist of all time. Jimi Hendrix (picture) and Eric Clapton didn't care, they both valued each other

Who is the best guitarist?

The extraordinary musician is above all a great music fan, including those of supposed competitors. In an old TV interview after Jimi Hendrix's death, he tells of a Fender Stratocaster that he wanted to give to Hendrix. Then his voice breaks. While an argument rages in the fan camps and among critics as to who deserves the unofficial title of best guitarist in the world, the two musicians appreciate each other very much. Still, Clapton is aware: while he remains a white boy from Europe who has been influenced by the black blues musicians from America, was Hendrix a black blues musician from America. Clapton can't do anything about that.

In 1974 Clapton, plagued by self-doubt, managed to break free with the solo album "461 Ocean Boulevard" and his version of Bob Marley's "I Shot the Sheriff". The tide also turns in his private life: Pattie, his great love, separates from George Harrison. It doesn't take long before she feels like Clapton's bands before: he loses interest and cheats on her whenever he is on tour: "Home is home, on the go is on the way," he writes about that time in his biography. When Pattie threatens to split up, he calls for her hand on the phone, and they get married a little later. 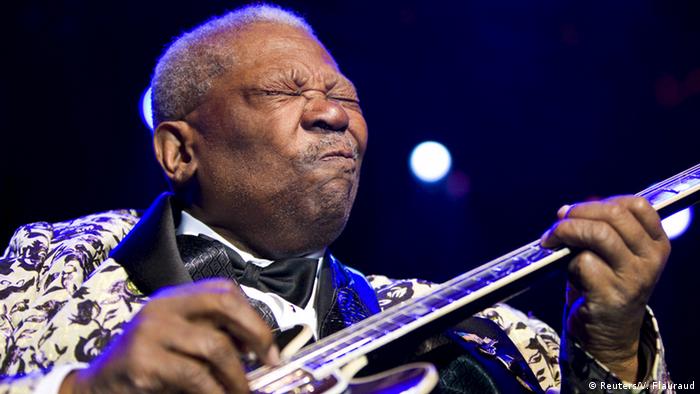 With Boyd, Clapton encapsulates himself less, he overcomes his heroin addiction, but soon reaches for the bottle. In the early 1980s, Clapton was almost never sober and constantly doubting. The only thing that keeps him from suicide is the thought of being dead and unable to drink any more. He is not a person who can keep moderation. He smokes 80 cigarettes a day. During his marriage to Boyd, Clapton became a father twice - each from affairs with other women. In 1984 Boyd separated from him.

In his biography, Clapton makes no secret of the fact that he has been an unpleasant contemporary for years. His warmest moments are when he describes how other musicians have influenced him and remembers when and where he first heard songs. He had an early musical awakening moment with "I Love the Woman", a B-side by the Texan blues musician Freddie King, which contains a guitar solo: "Up to this point I had believed that playing the guitar was only an accompaniment to the vocals."

In the 1980s, Clapton took to the stage in designer suits, the outfit resembling his sleek, uninspired albums from those years. He lets himself be talked into by the record company and leaves the production to his friend Phil Collins, who knows how successful music should sound like in the 1980s, but is not a blues musician.

The magazine "Rolling Stone" describes the album "August" from 1986 as "the prelude to a downfall". Clapton's private life has long been more important than his music in the media: Sheryl Crow, Cher, Sharon Stone, Naomi Campbell and Carla Bruni are just a few of his former companions, there are also rumors about a tête-à-tête with Lady Di.

One year after the birth of his son Connor, Clapton succeeded in alcohol withdrawal in 1987. In his early 40s he wants to grow up. Clapton visits Connor regularly after separating from his mother, including in New York in 1991. Shortly before Clapton wants to pick him up for a walk, Connor falls from the 53rd floor of the apartment building.

Instead of numbing his pain with drugs and alcohol, Clapton takes refuge in music and writes the song "Tears in Heaven" for his son. It is still part of the program of his concerts to this day. Clapton also played the song in 1992 on the set of his "Unplugged" appearance, the recording of which was his most successful album and earned him six of his 17 Grammys. 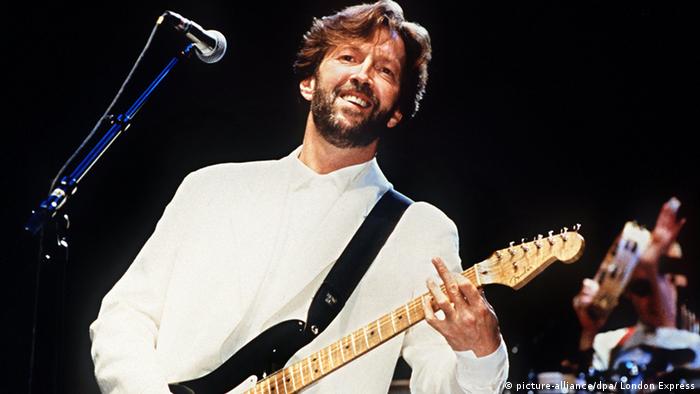 At the height of his success: Eric Clapton in 1992

Because his manager advised against the publication, Clapton separates from him and decides to only do what he feels like doing from now on. In the following years he succeeded in reinventing himself as a sedate blues musician.

Eric Clapton also finds peace in his private life. He married again in 2002, and now lives with his wife and three daughters in the property that has been a place of refuge for him since the 1970s.

Although Clapton has a nervous disorder, tinnitus and his hearing fails, he tours regularly. His game is still perfect, even if it is a bit too routine here and there. He doesn't lose many words on stage. And so it remains to be seen today, on his 75th birthday, how Eric Clapton stands for the public.