What was Confucius known for? 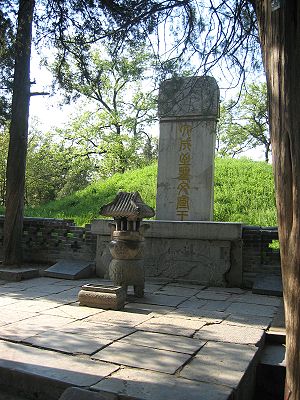 Confucius is said to have been born and died in the city of Qufu. The picture shows his grave.

Confucius was a politician and philosopher in ancient China. He worried about the world and about how to behave. Even today, many people in China and in other countries find his teaching particularly important.

He lived in a Chinese state called Lu about 2500 years ago. His ancestors owned a lot of land, and they are said to have descended from kings. But the family had become poor. Nevertheless, he managed to become a teacher. He went from state to state with his students. For a short time he worked as a politician in the highest offices. Then he had to flee.

Confucius himself did not write any works. It was only about a hundred years after his death that his followers wrote down his thoughts. This turned into thick books. It was similar with the Greek philosopher Socrates, who lived around the same time. What Socrates thought is only known thanks to his disciples like Plato.

The Chinese of his day called him Kong Qiu or Kong Zi. Kong was his family name. There are different ways to write the name with Latin letters. Kong Fuzi means something like Master Kong. When missionaries translated his works into Latin, it became Confucius.

What did Confucius teach?

For Confucius, education was the most important thing: one should keep learning in life. In his opinion, people were different only because they were raised differently. Everyone should have the opportunity to learn, not just the rich.

In the state, those who are educated should have power, not because they come from an important family. Confucius, however, recognized the order in the state. He rejected a change by force, a revolution, that is. Order is important because it enables freedom: everyone can only live well if people adhere to the rules.

Confucius does not comment on the afterlife. When asked how one should serve the spirits, he replied: "Whoever does not know how to serve people, how can he serve the spirits?" He answered the question about death like this: "Who does not yet know life, how does he want to understand death?" Nevertheless, ancestor worship is very important in Confucianism to this day.

There are also other search results for "Confucius" from Blind Cow and Ask Finn.