November 24th marks the 25th anniversary of the death of Queen front singer Freddie Mercury. His music is still ubiquitous, from the first hit “Killer Queen” to “We Will Rock You”, and he is still considered a figurehead in the fight against AIDS. But Mercury did not come out openly until shortly before his death, and he did not allow himself to be politically captured either. His bandmates recently defended this legacy against Donald Trump.

This article is older than a year.

25 years ago today, Freddie Mercury died. The legendary Queen singer was known for his charisma and humor.

After Mercury's death, Queen sold even more records than before, and there is probably no one today who does not know at least one song by Mercury - not even among Republicans. Because when on July 18 of this year the American presidential candidate Donald Trump, meanwhile elected president, stepped onto a stage bathed in clouds of fog and dramatic light at the party congress, he did so, accompanied by Queen's 1977 hit “We Are The Champions”. His audience was enthusiastic - and probably completely forgot that the bisexual creator of the song stands for everything they reject. The following day, Queen distanced themselves publicly from Trump via Twitter and forbade him from any further use of their music. 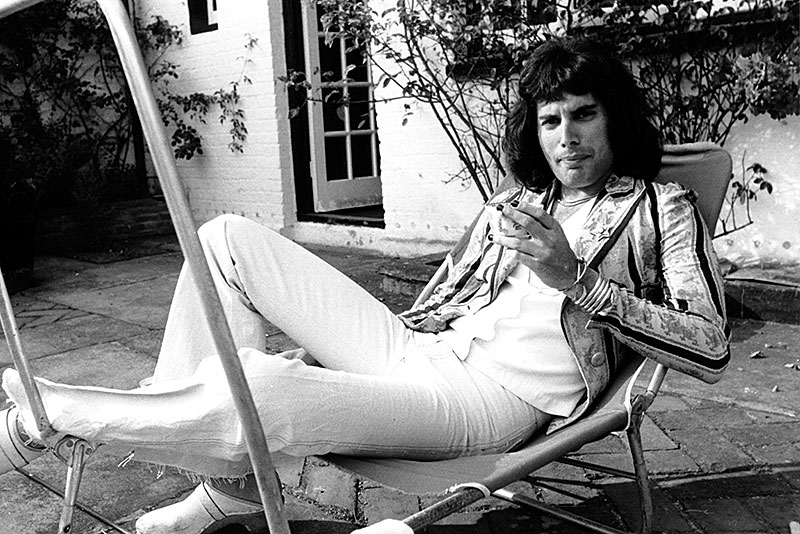 Three and a half octaves spanned the voice of Mercury, a distinctive trademark. In the 1970s and 1980s he explored musical boundaries with a mix of vaudeville, classical opera, hard rock and pop. “We will rock you”, “Radio Gaga”, “Somebody to Love”, like almost all of the band's songs, were significantly linked to Mercury's performance on stage and in the respective music videos: in miniskirt and high heels, he sang his way through vacuuming average British living room: "I want to break free".

With an ironic ease, Mercury also thematized emotional fears, loneliness, willingness to use violence, forlornness, the struggle of the “little, sincere man” against a distant society. Queen was a crowd-drawn band, unlike the Sparks who were active at the same time and made similar music. But their front man Russel Mael could never keep up with Freddie Mercury's stardom. 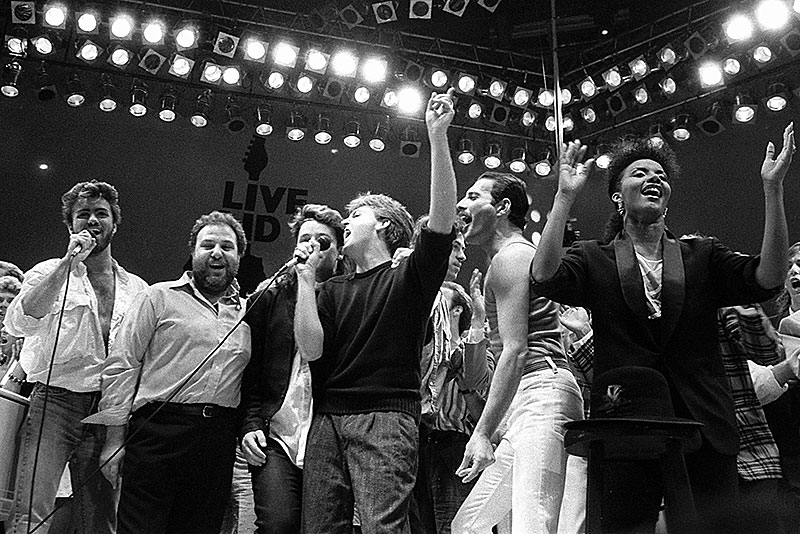 The birth of Queen

Freddie Mercury was born as Farrokh Bulsara on September 5, 1946 on the East African island of Zanzibar, now part of Tanzania, to Parish parents. He went to the boys' boarding school, where he learned to play the piano and made his first musical attempts with the school band The Hectics. In 1964 the family had to flee to England due to political unrest. The father worked as an accountant, the mother in the Marks & Spencer department store. Swinging London was a culture shock for the brave but ambitious Freddie. 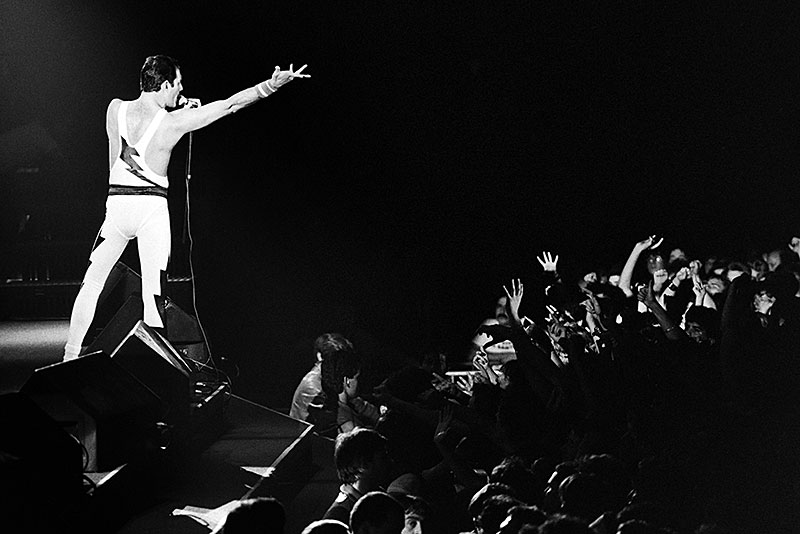 Mercury and his intimate connection with the audience (here 1984)

He began to study art and discovered Jimi Hendrix, he tried his hand at singing in short-lived band projects, including a group called Smile. He made friends with their musicians, astrophysics graduate student Brian May (guitar) and dentistry student Roger Taylor (drums) and not only shared an apartment with Taylor for a while, but they also ran a clothes stall at Kensington Market. In 1969 Mercury graduated with a degree in graphic design. When Smile was about to dissolve at the end of 1970, Mercury took over the helm, brought in electronics student John Deacon (bass) and presented the band under a new name: Queen.

Their bombastic combination of travesty theatrics and heavy rock awakened the market. The music magazine "Melody Maker" wrote at the time: "Queen is either the future of rock 'n' roll or a bunch of delirious queens who try to jump on the Bowie bandwagon while they screw Black Sabbath really badly." The beginning So it was rather slow. The first appearance on The Top of the Pops was due to a cancellation by David Bowie, but the third appearance on the show came in 1974 with Mercury's "Killer Queen" the first major international success. 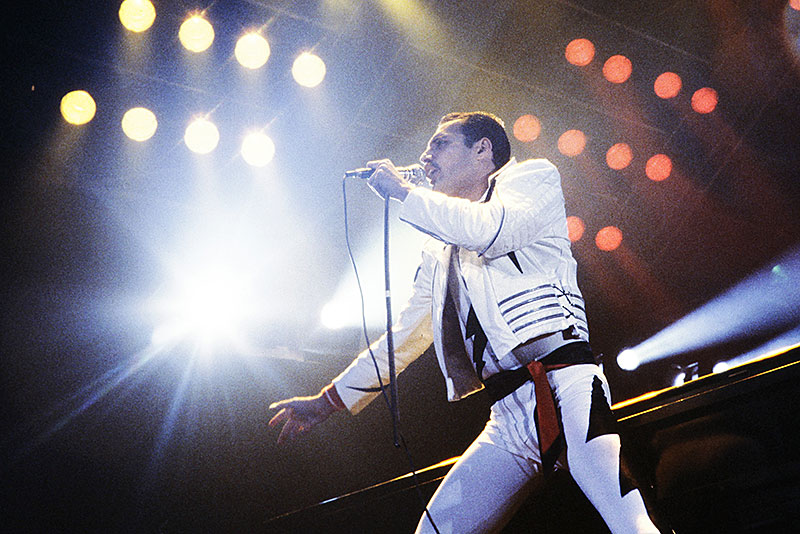 Mercury 1984 at a concert in Paris: The pose counts

Just one year later, Mercury's “Bohemian Rhapsody” broke all the boundaries of the conventional, creating an award-winning piece of rock history - and gave the new emerging “Dumb Dudes” culture of the early 90s its melody: the sing-along scene from “ Wayne's World, ”filmed through the windshield of Wayne's car, is iconographic today. But he was always silent about the interpretations that the song should be Mercury's coming out.

The 80s, radiated by neon-colored clothing and Chernobyl, flooded with fizzy drinks and shoulder pads, suspenders and teased hair, were at the same time determined by great social repression and fear. The cold war, the dying forests and the threat of nuclear missiles were around. And with the first diagnosed case of illness in 1981, there was suddenly a great, terrifying fear: AIDS.

Mercury never came out openly as gay, he never appeared as an "ambassador" for the gay community or the LGBT community, although they stylized him as a leading figure. Politically, too, he has always held back. Homosexuality was not officially forbidden, but queer people were strategically "kept out" of society. It wasn't until 1990 that the World Health Organization removed homosexuality from its list of mental illnesses.

Love of life and Munich

Mercury lived with his lover Mary Austin for years until he confessed to bisexuality in his private sphere in the late 70s and separated from it in all friendship; she became the chief heir to his property. At the beginning of the 80s, Munich became a second home and a retreat for Mercury to work productively and to pick up men in the gay bars of the Glockenbachviertel undisturbed. Queen moved into the wave and disco movement and helped shape the Munich sound.

Mercury met the Austrian Fassbinder actress Barbara Valentin. He lived with her as lovers, while at the same time continued to have affairs with men. With the dedication “For big tits and misconduct” he immortalized the voluptuous blonde on his solo album “Mr. Bad Guy ". 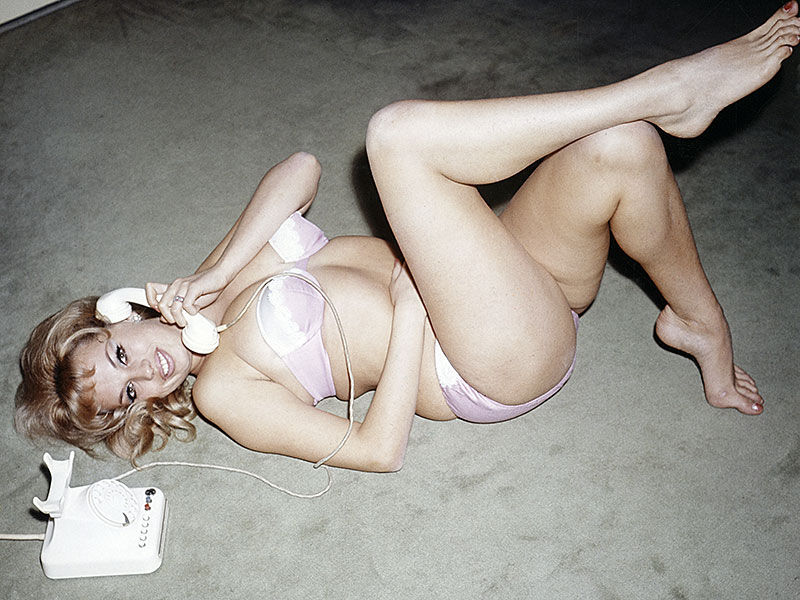 Freddie Mercury's girlfriend in Munich: Barbara Valentin, who died in 2002

The band's mega stadium tours in front of hundreds of thousands of fans are still unforgettable today. Slender Mercury with a giant schnauzer and an overbite turned into a dancing dervish with a naked torso on stage. Clenched his fist in the sky and always swirling the microphone stand elegantly suggestively, he had his audience completely in his hand.

Since his death, Mercury has become a bigger star than he ever was in his lifetime. The films in which Queen's songs found a prominent place are without a number. In the year after his death, world stars gave Mercury a farewell concert in Wembley Stadium's honor: 72,000 fans and a billion television viewers worldwide attended. The proceeds were used for the fight against AIDS. David Bowie sank to his knees on stage and prayed an Our Father for his friend.

Aside from Queen, Mercury had recorded a few titles with Michael Jackson in the early 80s. He caused a stir with the album "Barcelona", which he recorded with the Spanish opera diva Montserrat Caballe - the first crossover of its kind. He will continue to be a star. It was only on September 5 of this year, on Mercury's 70th birthday, that the International Astronomical Union (IAU) named an asteroid after him. "Asteroid Freddiemercury 17473" was discovered 25 years ago, the year Mercury died.