Tinnitus is a common problem

In Germany alone, more than three million people suffer from tinnitus. The causes can be very different and differ from person to person. In general, tinnitus can occur in connection with a variety of diseases of the ear and the auditory pathway.

With regard to specific causes of tinnitus, a distinction is made in the diagnosis between two types of tinnitus: a tinnitus that originates from an actual sound source in the body (e.g. flow noises in blood vessels), and a tinnitus in which no sound source in the body has been identified as the cause can be. If such a sound source can be identified within the body, it is referred to as objective tinnitus, otherwise it is referred to as subjective tinnitus. 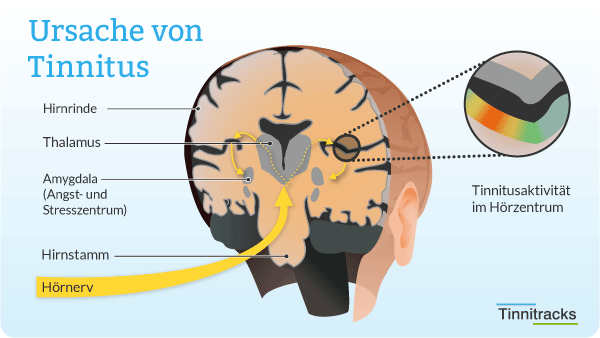 An overview of the causes of tinnitus

Find out in detail below about possible causes of tinnitus and learn which processes, according to the latest scientific findings, lead to the perception of subjective tinnitus, and which role the emotional and cognitive assessment play with regard to tinnitus.

New insights into how tinnitus develops

For a long time, science assumed that subjective tinnitus developed in the inner ear. However, this assumption has been refuted by the fact that tinnitus usually persists even after the auditory nerve has been severed.

With the help of imaging procedures it was also possible to determine that the changes in neuronal activity in different areas of the brain in tinnitus patients is. Basically, the healthy balance between inhibitory and excitatory processes in the auditory networks of the brain is disturbed: In the brain centers involved, there is increased activation and synchronized firing of the nerve cells without an actual sound source being present.

In this respect, there are parallels in subjective tinnitus to phantom perceptions and pain: abnormal neuronal activity occurs in the brain, although there is no corresponding stimulus as a trigger.

As a result, although tinnitus is triggered in most cases by hearing impairment, the cause that leads to the perception of tinnitus is located in the brain.

Which processes in the brain lead to the perception of noises in the ear?

The sensory cells of the inner ear are arranged tonotopically. This means that the cells that are anatomically located at the beginning of the cochlea are responsible for the perception of high frequencies. Those cells that are further at the end of the cochlea use lower frequencies. This arrangement can be symbolized with the keyboard of a piano: At one end are the low notes, at the other end the high notes.

Subjective tinnitus results from an incorrect course of this reorganization:

Affected nerve cells change their connections to neighboring cells in an unfavorable way, so that normal signal processing is disrupted. This can lead to chronic overactivity and synchronized firing of the affected nerve cells, which then becomes noticeable as tinnitus.

In tinnitus, the emotional evaluation of the noise in the ear plays a major role. Stress, restlessness or even fears can promote the development of tinnitus or increase the perception of noises.

Tinnitus patients often have psychological problems to a high degree as a result of ringing in their ears: sleep disorders, concentration disorders and depressive syndromes are the most common. The global extent to which a patient is affected by their tinnitus can be recorded using psychological questionnaires and quantified in terms of tinnitus severity.

Last but not least, the fact that Tinntus is an "invisible ailment" sometimes makes it difficult for those affected to find understanding for their burden in others.

Tinnitus patients often report that they are currently under psychological stress (permanent stress, burnout) when tinnitus first occurs. In addition, stress also has an intensifying effect on their subjective burden during the course of the illness. One to five percent of the total population develop serious psychosocial difficulties during the course of the disease due to tinnitus. Tinnitus can therefore have a negative impact on all areas of life for those affected and lead to serious, undoubtedly disease-related problems in coping with everyday life, which can range from concentration disorders to problems falling asleep and staying asleep and incapacity for work.

As a result of tinnitus, those affected sometimes withdraw from society: the noise in their ears makes it difficult for those affected to relax, so that they react more irritably in social situations without actually wanting to. Even the noise alone - without considering the psychological consequences - can also make communication with others difficult. The ringing in the ears or the frequent hearing loss make it difficult for those affected to take part in conversations. These circumstances can prevent patients from finding the necessary support in their environment or from establishing social contacts that can also have a stabilizing function for the patient.

Not only can tinnitus be a symptom of another disease itself, it can also cause many different symptoms. Find out here in detail about possible tinnitus symptoms and what treatment options are available.

shape
Specially filtered music (your favorite music) via the app

aim
Better quality of life through serenity in dealing with tinnitus.

aim
Lowering the volume of the tinnitus

Suitable for
any tinnitus that only you hear

Suitable for
prolonged tinnitus that sounds like a sound
Details

Duration
12 months of 90 minutes a day