What is the meaning of logarithms

With the rapid development of electronics and digitization from 1980 onwards, solving mathematical problems with high accuracy has become very easy. Written arithmetic with very large and / or small numbers was time-consuming without these aids and prone to small careless mistakes. With the help of the logarithms, the multiplications and divisions were simplified to intermediate steps with addition and subtraction. The exponentiation and the extraction of the square root of any exponent becomes multiplication and division with logarithms. There were also log tables with four to seven-digit mantissas. The four-digit table was sufficient up to the Abitur. For higher accuracy in the scientific field of the university, it had to be at least five or seven-digit logarithm tables. The first mechanical aid was the slide rule. It does not work directly recognizable for the user on a logarithmic principle. If you could handle powers of ten, you would get results with an accuracy of two decimal places much faster than using log tables.

The pocket calculator makes it easier to calculate with logarithms and provides results with very high accuracy without delay. All computers have an LG or LOG and LN key for the two most popular logarithms. In practical life we ​​often come across logarithms rather unnoticed. The sound propagation in the various media is described using a logarithmic sound pressure formula. The human ear perceives pitch and volume differences in a logarithmic relationship. The heating and cooling of physical and chemical processes take place with an exponential law. Biological growth and metabolic processes are exponential. The radioactive decay, the charging and discharging of capacitive electrical storage, the electromagnetism, chemical material conversions and pH value changes, everything happens with exponential law. Interest, compound interest and credit formulas are part of it. The calculations of the amount of substance, reaction and control times or other exponential parameters are made using the logarithms. In the IT area, information is also calculated logarithmically based on the number of states and bits. 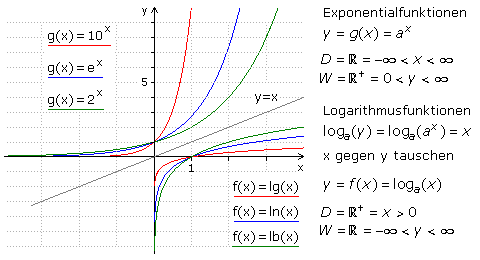 The symbol lg is used for the tens, decadic or Brigg's logarithm. The natural logarithm with Euler's number e as a base is indicated by the symbol ln (logarithmus naturalis). For the binary logarithm with the base number 2, the symbol lb (logarithm binary) or ld (logarithm dual) is common. For every other base log is written with the base number as an index. In contrast to this, the logarithmic function log (x) in the IT programming languages ​​is based on the base e and is therefore mathematically equal to ln (x). Base numbers can be all positive real numbers greater than zero and not equal to 1. The graph of the logarithm function with a> 1 is strictly monotonically increasing and with 0

All logarithmic functions have their zero at x = 1 and approach the y-axis asymptotically for x = 0. It can be seen that neither the logarithm of zero nor of negative numbers is defined. The logarithm of base 1 does not make sense and is excluded from the definition, since every power of base 1 gives 1 as a result. The result of taking the logarithm of a value, known as a number, is the exponent by which the base must be raised to the power to get that number.

Logarithm of a product 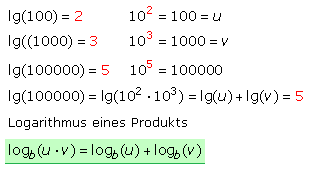 Logarithm of a quotient 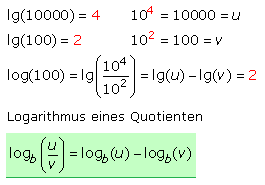 Logarithm of an exponential expression

The value 1000 written exponentially is 10³. If the logarithm lg (10³) is written as the product lg (10 · 10 · 10), the result 3 follows according to the derived product rule. The logarithm of its own base always has the result 1, since the exponent is calculated with which the base is assigned exponentiate is. But if this value is the basis, the exponent must have the value 1. A value with a negative exponent is equal to its reciprocal value with a positive exponent. 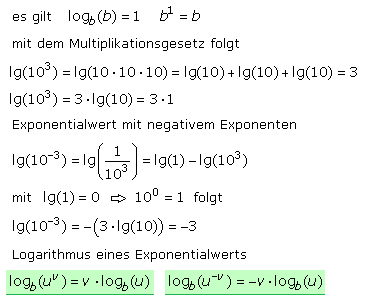 Logarithm of a root expression 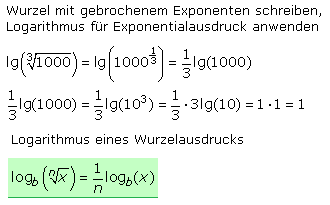 Logarithm of the power of a power

The calculation rule for the logarithm of an exponential expression can also be used for this. The power of a power is previously written as a new power, the product of the two exponents. 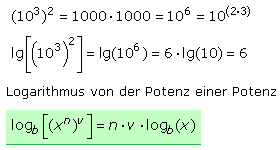 Conversion of logarithms on different bases

In an exponential function, the variable is in the exponent and becomes a factor by taking the logarithm. In most cases the base will be some number, so that a normal calculator program with the decadic or natural logarithm will not help. There is an easy way to convert the bases. The following example, which can also be solved without tools, works with the logarithm to base 3. At the end it shows the general calculation rule for logarithms of different bases. 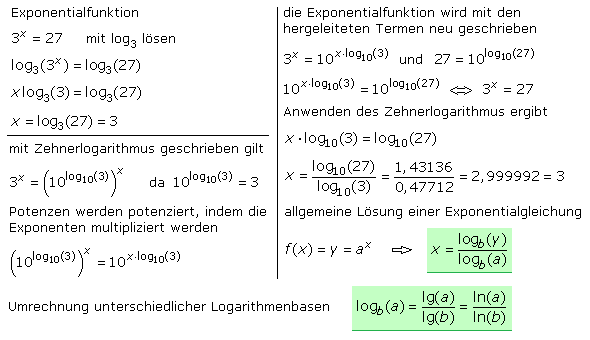 If one axis is linear and the other is logarithmically divided in the two-dimensional axis system, it is a simple or semi-logarithmic axis system. In mathematics, the x-axis of the variables almost always has a linear division and the y-axis of the function values ​​a logarithmic division. When displaying an exponential function in a linearly divided axis system, point coordinates can only be read off imprecisely. The function values ​​for x> 1 increase very quickly in small intervals, while with the same scale in the range up to x = 1 the changes are very small. With a semi-logarithmic division, the function graph becomes a straight line and the changes are easy to read. 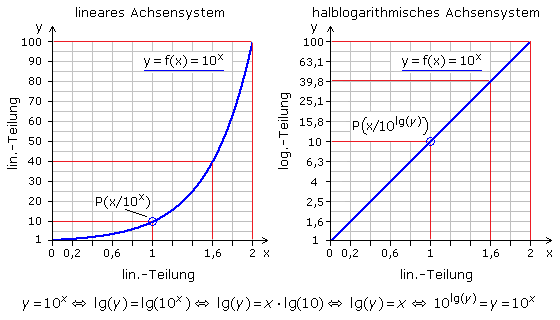 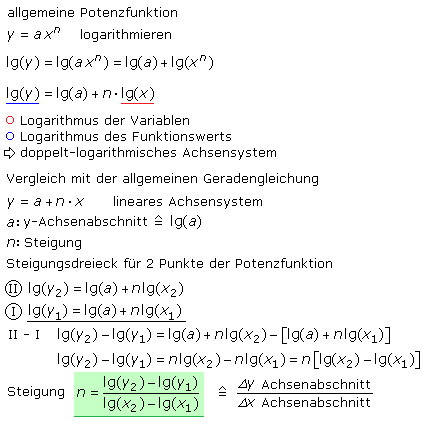 The properties of amplifier and / or signal transmission chains are often represented as a function of a frequency band. The audio frequency range extends from 0 to 20 kHz, so that only the logarithmic axis division makes sense. The power or voltage ratio is given in logarithmic decibel values. For a signal path, the calculations for amplifications and attenuations are simplified with dB values. These logarithmic values ​​are usually one to two-digit integers. They are simply added or subtracted. As non-logarithmic multi-digit values, they would otherwise have to be multiplied or divided. 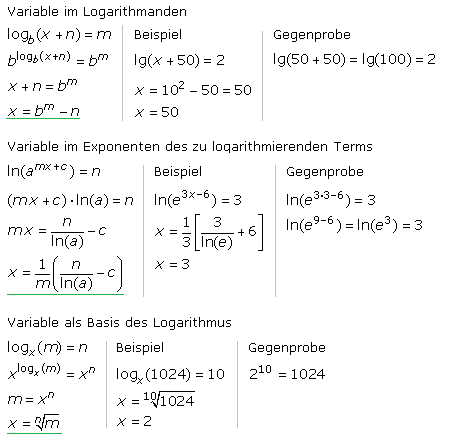 If the limit value observation for deriving Euler's number e is known, the derivation can also be made in somewhat more detail with the aid of the limit value formation for the difference quotient. The 1st derivative corresponds to the slope of the tangent at a point. It follows from the gradient triangle, where the small change (h) in the x-coordinate tends to zero due to the creation of the limit value and the secant thus becomes a tangent. 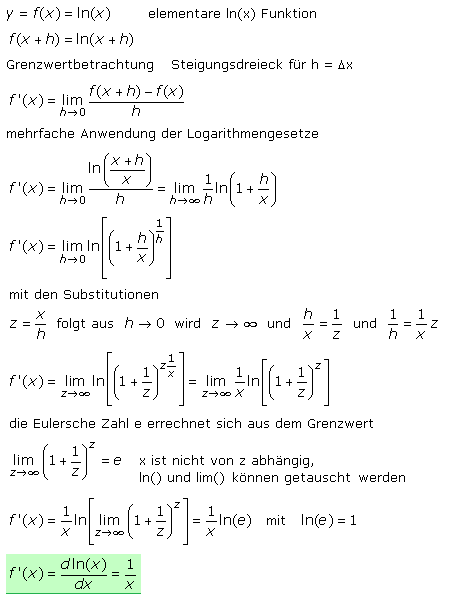