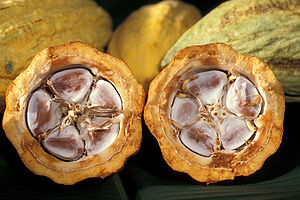 Cocoa is found in the seeds of the cocoa trees. We need cocoa as a dark brown powder in many pastries. However, we know cocoa best from chocolate, because it has a large proportion in there.

Where does cocoa come from? 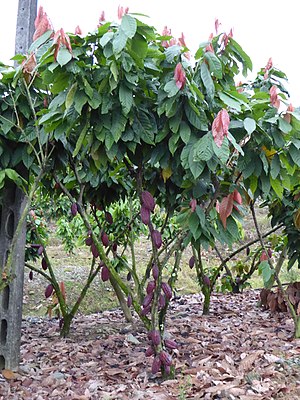 In the plantations, the cocoa trees are not allowed to grow so high. That makes it easier to harvest the rewards later.

Cocoa comes from cocoa trees. They originally grew in South America and Central America. In nature, cocoa trees grow as bushes in the rainforest. They are no more than 15 meters high there. They need a lot of heat, which is why they only grow in the tropics, near the equator. They also need a lot of water.

In biology, cocoa trees are a genus with many species. Cocoa is made from many of them today, but mostly from a single species called the “cocoa tree”. So as not to get confused, the scientific name for it is “Theobroma cacao”.

The Aztecs used the fruits of the cocoa tree for a special drink. The discoverers of America later brought the cocoa plants to Africa and cultivated them there. They later made it to Asia. The Ivory Coast produces the most cocoa today, namely a third of all cocoa that is produced in the world. This is followed by Ghana, Indonesia, Cameroon and Nigeria.

How do cocoa beans grow?

Cocoa trees have a lot of flowers. Unlike most of our flowers, they are not pollinated by bees, but by small mosquitoes. The more of these there are, the more cocoa beans can be harvested.

Cocoa trees bloom all year round because there are no seasons in the tropics. A cocoa tree must be around five years old before it blooms for the first time. Most of the flowers are from around the age of twelve.

A ripe fruit is up to a foot long, like most of the rulers we use in school. A fruit weighs around half a kilogram. It contains pulp and up to 50 seeds. They are called "cocoa beans".

How do you process cocoa beans?

This man turns the cocoa beans so that the sun dries them well on all sides.

Workers cut the fruit from the trees with their machetes, which are big knives. With this they also open the fruit. The pulp then begins to ferment immediately, so the sugar in it turns into alcohol. This means that the seeds cannot germinate, i.e. they cannot form roots. You also lose some of the substances that taste bitter.

The beans then usually dry in the sun. They are then only about half as heavy. Usually they are then packed in sacks and shipped. They are mostly processed in North America and Europe.

First the beans are roasted like coffee beans or chestnuts. So you are heated on a grid but not actually burned. Only then is the shell removed and the kernels broken. These pieces are called "cocoa nibs".

The nibs are then finely ground in a special mill, which results in the cocoa mass. You can process them into chocolate. But you can also squeeze it and thus contain cocoa butter. The dry mass that remains can be ground again. This is how cocoa powder is made.

What problems are there in the world with cocoa?

In the past, slaves had to pick the cocoa beans. Today it is often families who, however, also earn too little money with their work.

In America, cocoa is grown in large plantations. This is difficult for nature because the same thing always grows on huge areas, and because natural land is often sacrificed for it.

In Africa it is mostly families who produce cocoa. However, the families can often not really live from the money they earn with it. The government and the rebels are putting a large part of the money in their pockets to pay for their civil war. There is also the problem that children often have to help and therefore cannot go to school. There is even slavery and child trafficking.

Today there are various companies that are committed to fair trade in cocoa beans. They want to ensure that the families get a fair wage that they can really live on even without child labor. But such cocoa products cost a little more in the store.

Another problem lies in the trade routes. Large companies, for example, are holding back the cocoa in the hope that the price will rise. In fact, it can range from $ 800 to nearly $ 3,000 per ton. However, it is not the cocoa farmers who benefit from this, but the people and companies that trade in them.