What is the difference between viruses and bacteria?

Both are tiny and invisible to the naked eye. Both can multiply very quickly and make us sick. But other than that, bacteria and viruses don't have much in common.

Bacteria are living things that only consist of a single cell. This cell contains everything it needs for life: genetic material and cell machines that produce proteins and supply the bacteria with energy. Bacteria have their own metabolism - just like we do. They multiply by dividing.

Diseases caused by bacteria include diphtheria, cholera, whooping cough, and tuberculosis, for example.

However, not all bacteria make you sick. On the contrary: we urgently need many of the protozoa to stay healthy: intestinal bacteria, for example, help us with digestion. 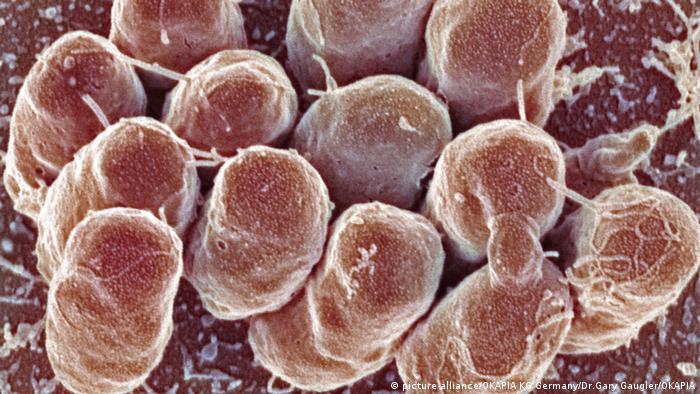 Viruses, on the other hand, are infectious particles and not cells. They usually only consist of a strand of genetic material with a protein shell around it. They do not have their own cellular apparatus to generate energy, manufacture proteins or multiply.

Viruses are therefore much smaller than bacteria. While the latter are usually around 0.001 millimeters in size, viruses only make it to a hundredth of this size.

Many scientists do not see viruses as living things at all. However, that depends on what you mean by the term "life" - there is no standard definition for it.

Viruses can only multiply with outside help. They smuggle their genetic material into the cells of other living beings and reprogram them: with a trick they trick the foreign cells - the host cells - into producing only virus particles from now on - until the cell bursts and the viruses are released.

Each virus specializes in a particular host cell. Some viruses attack plants, others attack animals or humans, and still others even bacteria. Viruses can cause AIDS, herpes, hepatitis, flu, rubella or yellow fever in humans.

Antibiotics only work against bacteria. Since viruses do not live, they cannot be killed either - only antiviral drugs, also known as antivirals, work against them. These inhibit the virus from multiplying, for example by preventing the viruses from entering the host cell.

Nevertheless, the doctor often prescribes an antibiotic for a viral infection, even if it does not work against viruses at all. But a viral infection weakens the immune system and gives pathogenic bacteria the chance to attack the weakened body and trigger an additional infection. Antibiotics are supposed to prevent this from happening in the first place.

Vaccinations can be developed against both bacteria and viruses.