What is Thanatos in Psychology

The drive theory developed by Freud states that human behavior is generated and controlled by drives [drive = goal-oriented behavior that is considered innate]. Drives represent the psychic energy that is necessary to carry out actions or to show behavior.

Freud differentiates between the drives Eros and Thanatos, which are constantly active and thus strive for constant satisfaction.
The life instinct 'Eros' [Eros = Greek God of love] serves to preserve the self and the species, e.g. through the ingestion of food or reproduction.
"As a life instinct or eros, it wants to preserve life, unite it and form ever larger units." Rheinberg (2000, 33)
The death drive (thanatos) includes the drive to die. Freud was of the opinion that every instinct was designed to restore a previous state (Freud: 'inorganic'). Since the lifeless precedes every life, Freud assumed the existence of a death instinct.
"The death instinct, on the other hand, wants to destroy units, ultimately to convert everything animate back into inanimate."
"The goal of aggression is probably not death and eternal rest, rather it seems to serve the principle of isolation, independence and individualization [...]." Elhardt (2001, 31)

These drives develop forces: Libido [Libido = Latin for urge, desire] is the expression of force (drive energy) of Eros and Destrudo [Destrudo = Latin for to destroy] represents the expression of force of Thanatos.
The libido is not only geared towards the physiological needs of self and species preservation, but also towards pleasure in a person's life. In this context, Freud drew particular attention to sexuality, which in his view constitutes a large part of human endeavor.
Freud calls the bundling of psychic energies of the above-mentioned forces on objects or people cathexis.

In the Freudian motivation system, not only the drives but also the various personality instances play a role.

“The Freudian model of motivation is based on endogenous drives, whereby the drive is a basic psychosomatic concept (body-soul unity). B. hunger, on the one hand physiologically investigate [...], but we can also study it from the psychological aspect [...]. "Elhardt (2001, 24)

Homeostasis = physiological balance; Stability of a relationship such as blood pressure

According to the homeostatic model of motivation:

example:
Due to a deficiency (e.g. food deprivation) a need arises or a need becomes conscious (e.g. hunger). The need is guided by the (physiological) drive to ingest food and leads to a goal-oriented behavior (looking for food). The target action (food intake) then satisfies the deficiency. The equilibrium (homeostasis) is restored.

This process can be illustrated by the following figure: 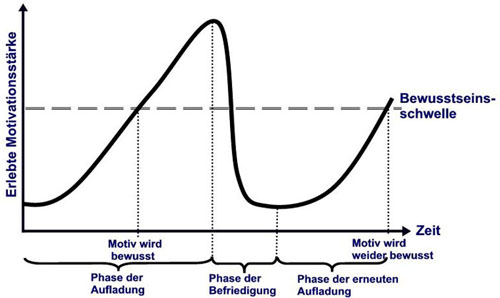