To the print version | german version

Great researchers from the fjord:

The Nobel Laureate in Chemistry is considered to be one of the fathers of modern biochemistry. The discoverer of cell-free fermentation worked in Kiel from 1893 to 1896. 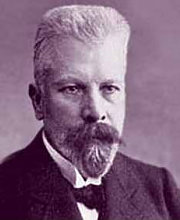 Eduard Buchner (1860-1917)
Little is known about Eduard Buchner's time in Kiel. Because there are only a few scientific publications from this time. "During the holidays he always went to his brother, the physician Hans Buchner, in Munich and worked there with pressed yeast juice," says Professor Roland Schauer, emeritus at the Biochemical Institute. By chance, shortly after leaving Kiel, Buchner made a discovery that earned him the Nobel Prize in Chemistry in 1907. For his brother he made cell-free extracts from yeast, which he wanted to use for immunological purposes. In order to preserve the protein extract from the yeast cells, he added sugar, as in preserving jam. "In doing so," says Schauer, "he noticed that bubbles formed." That is, carbon dioxide and alcohol were formed. Buchner had obtained an enzyme mixture (called zymase) from yeast that made glycolysis, i.e. converted sugar into alcohol.

This was new and contradicted the theory of the French chemist and microbiologist Louis Pasteur (1822-1895). With Pasteur, the vast majority of fermentation technologists, chemists and physiologists assumed that processes such as putrefaction, putrefaction or fermentation are caused by the smallest living beings. Triggering fermentation was thus one of the vital functions of the cell, such as breathing, growth and reproduction. These reactions should only take place if the cell was still alive. Buchner's extract was free of cells and could still ferment sugar.

With this discovery he proved the opinion of the German chemist Justus von Liebig (1803-1873). Liebig was convinced that biochemical reactions can also take place outside the cell. The mechanisms that make up a living system and take place in a cell should, according to Liebig, ultimately be described in terms of chemical reactions. The entire biochemistry is nothing more than normal chemistry. With his discovery, Buchner, after whom a building of the biochemical institute on Otto-Hahn-Platz is named, laid the foundation for modern biochemistry. Buchner's first communication, "About alcoholic fermentation without yeast cells," appeared in the reports of the German Chemical Society on March 23, 1897, after it was received there on January 11, 1897. Ten years later he received the Nobel Prize for it.

A scientist from Kiel, the biochemist Otto Meyerhof (1884-1951), was also involved in the further elucidation of the enzymatic breakdown of sugar. In 1922 he received the Nobel Prize in Physiology / Medicine.

Eduard Buchner was born on May 20, 1860 in Munich. When his father, a doctor, died, Eduard was not yet eleven years old. Buchner studied chemistry, botany and physics at the University of Munich and at the Polytechnic, today's Technical University of Munich. During his studies he worked in a canning factory. Already during this time he came into contact with questions about fermentation chemistry. In 1885 Buchner published his first work "On the Influence of Oxygen on Fermentation".

Buchner was not only a biochemist, but also made remarkable achievements in organic chemistry. About half of his 120 scientific publications are devoted to his organic chemical investigations. They are mainly concerned with the chemistry of the diazoalkanes, as can be read in the Buchner biography of the Berlin chemist Rolf Ukrow. Buchner took over and developed this research area, which is very important for organic chemistry, from his teacher Theodor Curtius (1857–1928). In 1888 he received his doctorate under Curtius' supervision in Munich on "A new synthesis of derivatives of trimethylene", in which he proved the existence of a cyclopropanol ring. During his habilitation (1891) he was the first to synthesize pyrazole (a ring molecule with three carbon and two nitrogen atoms) himself. This reaction, a cycloaddition with diazoacetic ester and benzene, is known as the Buchner reaction. Pyrazole is the parent substance of many interesting compounds in organic chemistry. "Organic chemistry still lives from this award-winning discovery," explains Schauer, who dealt intensively with the scientist when the institute was named.

In the autumn of 1893 Buchner moved from Munich to Kiel University, where he continued his organic-chemical work under the direction of Curtius. In 1895 he was appointed adjunct professor. In 1896 Buchner went to the University of Tübingen as an associate professor for analytical and pharmaceutical chemistry. Buchner completed the longest period of his research and teaching activities from 1898 to 1909 at the Royal Agricultural University in Berlin. Other stations in his academic career were Breslau and Würzburg.

"Buchner's life ended tragically," writes Rolf Ukrow. As a major in a Bavarian ammunition column, the father of three children suffered a serious injury on a section of the front in Romania on August 11, 1917, the consequences of which he died two days later, on August 13, in the Focsani field hospital.

Dispute over the discovery

For his discovery of cell-free fermentation, Eduard Buchner was awarded the Nobel Prize in Chemistry in 1907. Maria Manasseina (1848 - 1903) from St. Petersburg also claims this discovery for herself. The Russian doctor carried out experiments in 1871, from the results of which she concluded the existence of a fermentation process without the involvement of living yeast cells. Her work appeared in Julius Wiesner's "Microscopic Investigations" in 1872. So 26 years before Buchner's publication on cell-free fermentation. "She ground yeast or even let it char in another experiment," explains Professor Roland Schauer from the Biochemical Institute. Under the microscope, she had shown that no more yeast cells grew. She published her claim to the discovery of cell-free fermentation in the same journal in which Buchner published his results on cell-free fermentation, reports Schauer. Buchner replied that the techniques were not that good at the time and that their sugar solutions were contaminated with microorganisms. The majority of scientists followed Buchner's presentation. "Be that as it may, Maria Manasseina was on the right track and close to success and she was aware of this path," says Buchner biographer Rolf Ukrow.