Shortly before winter, Toyota is introducing the all-wheel drive versions of the Camry and Avalon from. With the Camry there was the four-wheel drive called All-Trac from 1988 to 1991, the Avalon never had this option. The technology can now be ordered as a simple option for the Camry LE, XLE, SE and XSE models as well as for the Avalon XLE and Limited variants.

The Japanese developed the sedan all-wheel drive in their development center in Saline, in the US state of Michigan, for the US market. According to the manufacturer, they also want to offer all-wheel drive to customers who do not want to switch to an SUV - and the Camry has been one of the most successful models on the American sedan market for years. 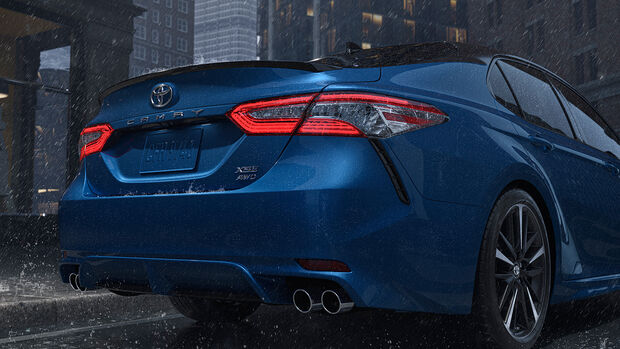 Toyota
AWD lettering on the rear of the Toyota Camry.

Technology from the RAV4

The technology from the current RAV4 SUV series forms the basis of the new all-wheel drive for the Camry and Avalon. Dynamic Torque Control should optimally distribute the torque, especially on slippery roads - up to 50 percent of the force can be applied to the rear axle. If all-wheel drive is unnecessary, for example on long motorway journeys, an electromagnetic clutch decouples the rear part of the drive train.

For the integration of the all-wheel drive, the engineers had to heavily modify Camry and Avalon. You have adapted the floor structure, installed an electronic parking brake and swapped the flat tank for a saddle-shaped one. Despite the rear differential, the height of the trunk floor remains unchanged. The weight of the Camry increases by 75 kilograms because of the additional drive components. 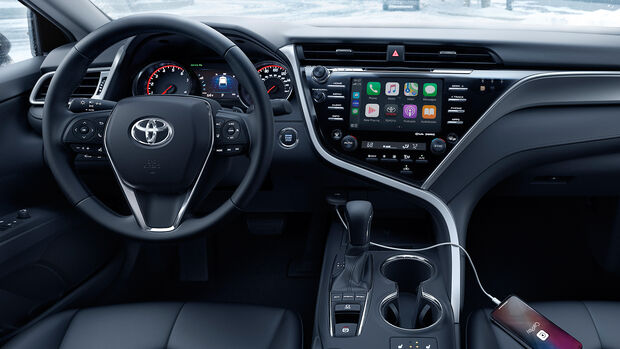 Toyota
The all-wheel drive versions of the Camry get an electronic parking brake.

For the US market only

The new Camry AWD will hit dealerships in spring 2020, and deliveries of the Avalon AWD will begin in autumn 2020. Both models are intended exclusively for the US market.

Toyota Camry with front-wheel drive for the German market

The Toyota Camry is one of the best-selling models in the world, the Japanese carmaker sells more than 700,000 units per year, and since it was launched in 1982, 19 million vehicles have been sold in more than 100 countries across all generations. In the USA, the Camry is also one of the bestsellers. The mid-range sedan has also been available again in Western Europe since April 26, 2019. Unlike the previous generations or on the US market, only a hybrid drive provides propulsion. Prices in Germany start at 39,990 euros.