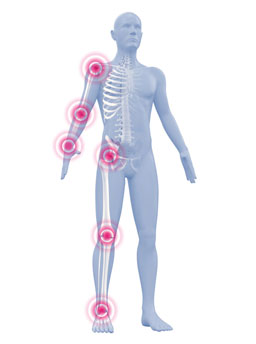 In rheumatoid arthritis, the joints are chronically inflamed; the joints are still swollen and the levels of inflammation in the blood remain high - and yet the patients are noticeably better. How can that be? "If we medical professionals cannot measure that the symptoms have improved, we initially do not believe in it," says Prof. Dr. Georg Schett from the University Hospital Erlangen. But patients with rheumatoid arthritis, one of the most common autoimmune diseases in humans, in which the joints are chronically inflamed, have confirmed the phenomenon time and again: one or a few days after starting drug therapy with TNFalpha blockers, they suddenly feel better. TNF-alpha blockers inhibit the action of an essential inflammatory messenger substance, the tumor necrosis factor alpha, or TNF-alpha for short. Professor Schett: “Why this therapy leads to an alleviation of the chronic disease so quickly has been unclear until now. Because the drugs dampen the pain and increase well-being even before the inflammation has subsided. ”The scientists began to search for the cause of the phenomenon.

The solution lies in the brain

"We were of the opinion that such a subjective improvement in the state of health should most likely take place in the patient's brain," said the rheumatologist. With the support of the Federal Ministry of Education and Research (BMBF), the research group around Prof. Dr. Georg Schett and Prof. Dr. Andreas Hess succeeded in objectively measuring the perception of the disease in the patient's brain with the help of functional magnetic resonance imaging, or fMRI for short (see info box).

Treatment with TNF-alpha blockers quickly inhibits neuronal activity in the patient's brain, shown here in color in the fMRI, and thus increases their well-being even before the inflammation has subsided.

A look into the brain showed that just one day after starting treatment with TNF-alpha blockers, the neuronal activity in the brain of those affected, which is triggered by rheumatoid arthritis, declines. This changes both the activity of brain regions that are responsible for processing pain in the brain, such as B. the activity of the thalamus, as well as brain regions that are responsible for the formation of feelings, such as those of the limbic system. “What is particularly interesting is that these changes in brain activity occur before the symptoms of rheumatoid arthritis objectively improve,” explains Professor Schett. The perception of the disease by those affected is reflected in the brain and can be measured.

The researchers know from experiments with mice that TNF-alpha mediates between the immune system and the brain and also has a decisive influence on pain perception. The Erlangen researchers can now explain this effect: if the tumor necrosis factor is inhibited, the sensitivity to pain in the brain is reduced, and psychological changes such as tiredness and fatigue are also positively influenced.

Can the effect be predicted?

Pharmaceutical companies that manufacture TNF-alpha blockers have already expressed great interest in working with Professor Schett's research group. This is because showing the perception of rheumatoid arthritis with functional magnetic resonance imaging offers the possibility of quickly recognizing and possibly predicting the effects of therapy. This could be helpful in developing new drugs. 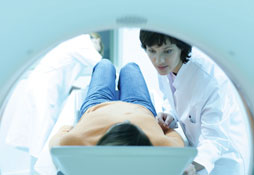 Professor Schett and his colleagues are currently working on a clinical study. They want to test whether the brain activity in the fMRI can predict whether a patient will benefit from therapy with TNF-alpha blockers or not. “That would be of particular importance. Because at the moment we always use TNF-alpha blockers in the sense of 'try-and-error', as we cannot predict on the basis of clinical parameters whether someone will respond to the therapy or not ”, describes Professor Schett. The scientists suspect that it is not the extent of the symptoms of the disease but rather the extent to which the patient will perceive them that can predict the success or failure of the therapy.

Functional MRI: a look inside the living brain

Magnetic resonance tomography, or MRI for short, also called nuclear spin tomography, works with a magnetic field to which the atoms in the body's cells react. Depending on the type of tissue, the number and composition of the atoms is different and different structures of the body can be shown in detail. Functional MRI, or fMRI for short, can also record function in addition to structure. Here the scientists take advantage of the fact that the red blood pigment, hemoglobin, changes its magnetic properties when oxygen is transported. This means that where there is a lot of oxygen on the way, the MRT image now appears brighter, for example. Instead of an external contrast agent, the blood itself is used as a contrast agent to visualize active areas in the brain.
Contact Person:
Prof. Dr. Georg Schett
Medical Clinic 3 - Immunology and Rheumatology
university hospital Erlangen
Krankenhausstrasse 12
91054 Erlangen
Tel .: 09131 85-33363
Fax: 09131 85-34770
Email: [email protected]
<?