Why do horses have high withers?

More than a hump: the horse's withers

A small hump on the back is practical: it allows the neck and back to be leveraged, keeps the saddle in the right place and determines how big a horse is. Besides, the Withers a feel-good button: Horses relax when they nibble at each other. Biomechanics, physiotherapists and behavioral experts explain the anatomical importance of the bump for the horse, how it affects riding and why some vets lower ponies through operations.

All herbivorous animals need a long neck so that they can maximize the reach of their mouth, "says Professor Preuschoft, Biomechanics from Bochum. This long neck requires a deflection arm that raises and lowers the thick neck muscles with little force. "The withers enable the horse to leverage the neck around the back," says Ralf Döringshoff, physiotherapist and trainer B from Drochtersen in Lower Saxony. This is the only way the neck can counteract the stomach, which otherwise pulls the back down. "You can see that especially when you nod your feet and canter", says Ralf Döringshoff.

The Withers protrudes between the shoulder blades and forms the transition from the fore to the metacarpal in the horse. The slight hump is created by the first Spinous processes the anterior thoracic vertebrae, which protrude up to 30 centimeters. This is where the neck tape starts. A bursa sits on the highest point of the withers. It buffers the point where bones and tendons could rub against each other. If the saddle, lunging belt or driving harness rubs against this bursa over the long term, inflammation occurs. In the worst case, a purulent one develops Withers fistula.

There are thin muscles at the withers

There are only a few muscles around the Withers around. “They connect the forelegs to the trunk,” says Professor Preuschoft. These include the rhomboid muscle that moves the shoulder and lifts the neck, the Trapezius, which moves the limbs forward and the long back muscle that is involved in all forward movement.

In addition, the muscles are very thin. "The trapezius is only as thick as a DVD," says Ralf Döringshoff. The shape of the hump is different for every horse: there are high, flat, wide and narrow withers. Generally have large-framed horses with long necks also a more pronounced withers than ponies short necked ponies. Breeders want pronounced withers that run harmoniously into the back.

One to high withers is for a Riding horse just as undesirable as a very flat one. Age and health also determine how pronounced a withers look. "It often looks more distinctive, especially with older horses," says Ralf Döringshoff. This is because the muscles shrink with age and the fat deposits under the skin recede. Most of the time, the back is also lowered a little, so that the withers appear more prominent. Even very young horses that are still growing have a very pronounced hump in the meantime. “This is because the neck is the last to grow,” says Ralf Döringshoff.

There are many in the animal kingdom Hump ​​animals. Why do giraffes have a particularly large withers and dogs a very small withers? Generally all four-legged friends have a withers. There is a relationship between height at the withers and head and neck weight. Depending on how long the neck and how heavy the head, the higher the withers. For example with the giraffe: Although it has a very small head, it has a long neck. Deer also have very pronounced withers. They don't have such a long neck, but they have to wear heavy antlers. Dogs have hardly any withers. They have a short neck and a light head. 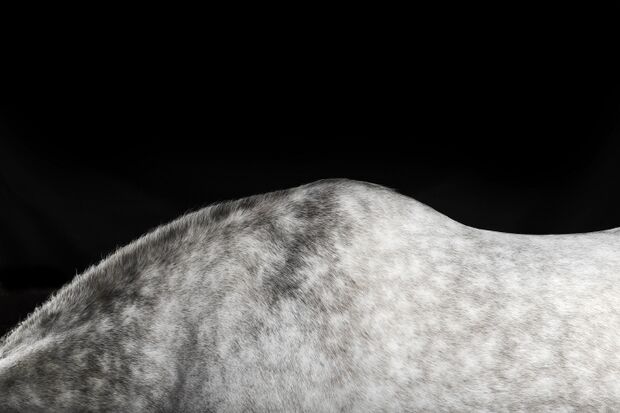 Little wheel
This is how it is structured: The withers protrudes between the shoulder blades and forms the transition from the fore to the metacarpal. It consists of the first spinous processes that are up to 30 centimeters long.

In this way riders protect the withers

A bony withers can also be pathological. Veterinarians refer to atrophy when the muscles at the withers are atrophied. They can have many causes. A poorly fitting saddlethat constricts the withers can put pressure on the trapezius muscle. This prevents muscles from growing here. A wrong riding style can also be behind it if the substance around the withers disappears: riders who work with hard hands against the horse pull themselves together with the saddle against the withers.

Riders can damage the withers as soon as they get on. The hump prevents the saddle from sliding to the side. But without Ascent aid it is an enormous feat. In a weighing experiment in September 2004, CAVALLO showed for the first time the forces horses have to withstand when climbing off the ground - and one-sided. This throws them off balance and twists their vertebrae. Because the rider hanging on the horse not only brings his weight, but also that of the horse to the ascent side: If a rider weighing 90 kilograms climbs to a 475 kilogram
Ha † inger, the horse's left legs suddenly have to carry 479 kilograms, while the right legs only weigh 56 kilograms.

For the rider, the withers is crucial because the position of the horse's saddle is decisive
certainly. If the hump is too high, the saddle needs a very high chamber, otherwise the gullet pinches or the pommel permanently on the sensitive bursa presses. Often the center of gravity of the saddle is too far back and lets the rider tip backwards. If the withers are very thin, there are no problems with the Gullet, but the saddle slides more easily to the side or too far forward.

Saddlers used to solve such problems with you Tail strap. This is controversial today because it often brings new difficulties: The strap pulls permanently on the tail and the tail can no longer swing easily. In addition, the belt presses on the sensitive sacrum
Region. The horse tenses in the back. Pre-belts that are strapped under the saddle are also dangerous: They put pressure on the shoulder muscles and prevent the shoulder blade from rotating backwards.

The horse cramps and thereby restricts its own Freedom of movement clearly one. In recent years, saddlers have adapted better and better to the different types of horses, especially the
in the Leisure rider area are represented. The saddlers meanwhile offer suitable solutions for almost every problematic saddle position without tail straps or front straps. Who likes to go to the
swinging bare horse back, it also has to do with the withers.

While the saddle does not hold well on round horses with † flat humps, it is all the more comfortable to ride such animals without a saddle. In contrast to the angular and angular horses: There the rider receives hard knocks. The Withers not only determines the saddle position and seating comfort without a saddle, but also the size of the horse. The height of the stick, which is particularly important for pony riders, is measured at the highest point of the stroke.

Because only horses with one are allowed in pony tests Height up to 1.48 meters start. If the pony grows beyond this measure, it has to compete against large horses. This may decrease the sales value and therefore make breeders ... 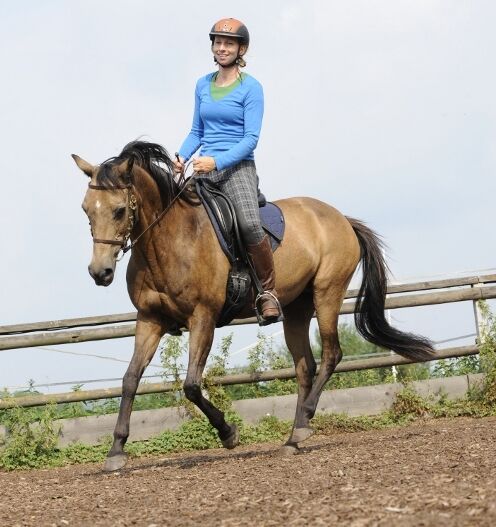 In the past, courts and prosecutors have dealt with cases in which the owner has her Operatively lower the bangs let. In one case, a windy vet shortened the first spinous processes without further ado so that the good animal could still start in the pony class. The case went to court.

Owner and vet argued with them because of health: Bony masses would have made the operation necessary. The X-rays for this, however, had disappeared. The owner was eventually acquitted for lack of evidence. Another common practice to shrink the horse: rasping the hooves as short as possible. However, this increases the risk that the pony will no longer walk - because of Dermatitis.

The withers play an important role not only for riding and the rider, but also for horses among themselves. Because here is an important one Feel-good button. "During mutual grooming, which is known as grooming, horses mainly nibble on the withers," says Marlitt Wendt, behavior expert from Großhansdorf in Schleswig-Holstein.

Stroking the withers calms the horse

Behavioral scientists have found in studies that the heart rate of the animals is significantly reduced by scratching. Horses do a so-called Pleasure face: You stretch your neck, half close your eyes and stretch your upper lip, which usually twitches rhythmically. Horses are probably particularly happy to let others crawl this spot because it is difficult for them to scratch themselves. Horses are very social animals and love to groom each other.

They fight itching or support it Change of coat. Grooming is also used to create and deepen indications between horses. In smaller groups, everyone often nibbles with each other. There are favorites in larger groups. The approach to social grooming always follows a similar pattern between horses: a horse approaches with pricked ears, easily open mouth and drooping lower lip.

The Feel-good button riders can also make use of the hump. They improve their bond with the horse by imitating the crawl. Foals especially love such pampering sessions. But adult horses also enjoy it.Even when riding, a handle is worth it. to the withers: a short crawl calms excited candidates or reward eager animals. The withers also play a role in the horses' sexual behavior. Stallion and mare nibble each other when they approach. During the mating act, the stallion grabs the mare by the withers or the mane comb. The fight between two stallions is rougher. "Bites in the withers are very painful," says Marlitt Wendt.

In the so-called wrestling, the two opponents try to circle each other with the neck and the Opponent's withers to grab with your teeth. So they force themselves to the ground. Usually, however, scuffles between stallions are pure exhibition fights. They follow strict rules and there are seldom serious injuries. Clever riders handle their horse's withers with care. After all, the hump is the height - an anatomically important all-rounder with a feel-good factor. 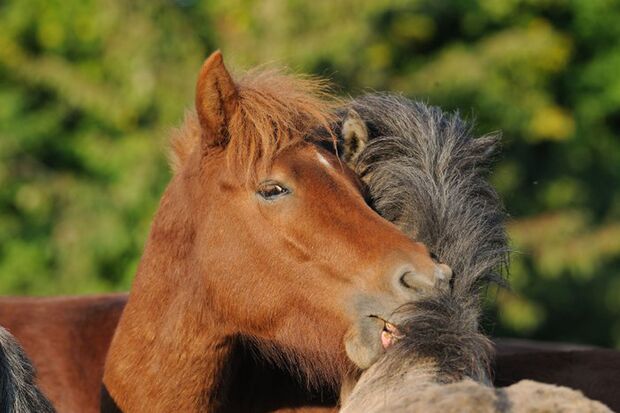