Even with propane there are two different places at which the propane molecule can become a radical. In the propane molecule, primary and secondary hydrogen atoms are found on carbon atoms. If the alkane is branched, there are even tertiary hydrogen atoms on carbon atoms. The radical substitution is a reaction that is built up from several steps. The more stable the alkane radical that is formed in the first step, the lower the energy barrier between the starting materials and products and the more this alkane radical reacts in contrast to the other alkane radicals. This effect decreases as the temperature of the reaction mixture increases, i.e. at high temperatures the differences no longer have such a strong impact.

The Stability of the radical increases from a primary to a secondary to a tertiary radical. If there is no alkyl group, the charged carbon atom is virtually unprotected and this radical is therefore quite unstable. If there are one, two, three or four alkyl groups in the vicinity of the atom, the radical becomes more and more stable because the charge is more protected. The protection comes about by the

The is also decisive for the distribution of the products between primary, secondary and tertiary haloalkanes Reactivity of the halogen used in each case. If its reactivity is high, the stability of the radical no longer plays a role, since it reacts quickly anyway. If the reactivity is very low, then the stability is to be assigned a high priority. The effect of the halogen used can be read from the following table:

Example: We want to do a bromination. Let us consider the following molecule: 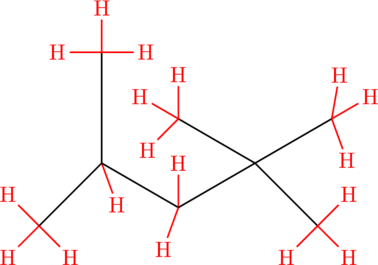 With the primary hydrogen atoms, there are now two different options for the product molecule: The six hydrogen atoms on the left react to form the following molecule (1):

If we look at all of the hydrogen atoms, we will see that all the primary hydrogen atoms on the left are equivalent. They react to one and the same molecule, since we can turn all C-C bonds at will.

One tertiary hydrogen atom reacts to form the following molecule (4):

From the table for the regioselectivity of the halogens we can now read that for bromine in a reaction at 98 ^ C the following distribution between primary: secondary: tertiary applies:

So we get the molecules numbered above in the following ratio: