When did the Battle of Juetland end?

The sea battle near Heligoland

Instead of seeking the decisive battle with the German fleet as expected by the Imperial Navy, the Royal Navy set up a remote blockade in the North Sea when the war broke out in 1914. This cut off the German Reich from supplies of food and raw materials and could not be broken by the German naval forces due to the small radius of action of the deep sea fleet. The fact that the German and British battle fleets threatened each other resulted in a de facto strategic stalemate in the North Sea.

On August 28, 1914, the first major naval battle between the Germans and the British broke out near Heligoland. After the handover from Great Britain to the German Empire in 1890, the island was expanded into a sea fortress. After the start of the war, light naval forces were stationed here to monitor the German Bight and to protect the German North Sea coast, which the British naval forces ambushed.

At 6.52 a.m. the British submarines E 6, E 7 and E 8 lured numerous German destroyers and torpedo boats out into the North Sea. The first phase of the battle began and although visibility was poor, everything went as planned from the British point of view. Admiral Hipper, commander of the German reconnaissance forces, only suspected the presence of light British naval forces and therefore only sent the two small cruisers FRAUENLOB and STETTIN for support. They reached the combat area around 8:00 a.m. and covered the retreat of the German torpedo boats. They suffered several hits from artillery, but could also damage Commodore Reginald Tyrwhitt's flagship, the light cruiser ARETHUSA. Emerging fog increasingly obstructed the view and also made it impossible for the long-range guns to intervene on Heligoland. Poor visibility and the resulting lack of orientation caused serious confusion on both sides. Neither the German nor the English commanders were able to create a clear picture of the situation and to manage their own forces in a coordinated and effective manner. More and more the battle turned into a chaotic mess.

The British managed to cut off and sink the German torpedo boat V-187. When two more British light cruisers suddenly emerged from the fog, Tyrwhitt's units, unaware of the reinforcements sent, kept the two newcomers for German ships. Just before they were about to open fire, they realized their mistake. At around 11 a.m. the small cruiser STRASSBURG attacked the already battered ARETHUSA again, but was pushed aside by the British destroyers accompanying it.

Due to the persistently poor visibility, the small cruiser MAINZ got in the way of some newly arriving British cruisers and sank around 11.10 a.m. after repeated artillery and torpedo hits. “The last I saw of her was a complete wreck, the entire midship a smoking inferno. On the forecastle and stern, a gun was still spewing poison and bile, like a wildcat that has gone mad from wounds, ”said the British lieutenant Oswald Frewin, describing the end of the MAINZ. Commodore Roger Keyes brought the destroyer LURCHER alongside the MAINZ and rescued 210 men, including 60 wounded, regardless of the danger of explosion. Amidships it was a smoldering stove, two of its chimneys had fallen over, the wreck seemed glowing red, the heat sank your face on the bridge of the LURCHER ... ”, Frewin recalled (Bruce 1993, 33).

Meanwhile, the Harwich Force was attacked again by German small cruisers. To relieve them, the battlecruisers called by Tyrwhitt by radio intervened in the battle and decided the battle with their heavy artillery in favor of the British. The two small cruisers CÖLN and ARIADNE were sunk and three others were badly damaged. The other German naval forces withdrew. The German capital ships, on the other hand, came too late to be able to intervene in the action. Due to the tidal conditions, the battlecruisers, which were broad in Wilhelmshaven, could not leave in time. When they finally appeared in front of Heligoland that afternoon, the British had already withdrawn.
The battle off Heligoland had cost the Imperial Navy the three small cruisers MAINZ, CÖLN and ARIADNE as well as the torpedo boat V-187, and other ships had been severely damaged in some cases. 1240 German seamen were killed, wounded or taken prisoner. The British, however, had not lost a ship, only four were badly damaged. In addition, they had 35 dead and 40 wounded. Despite considerable planning, coordination and communication errors, the Royal Navy, with a good deal of luck, was able to win the first meeting with the Imperial Navy in the North Sea. If the German battle cruisers had been there in time, the battle off Heligoland might have taken a different course. But the Royal Navy had won the first moral battle. The defeat at Heligoland revealed considerable deficiencies in the Imperial Navy in the areas of reconnaissance and security. There were also tactical and operational errors. The level of readiness of the ocean-going fleet had also proven to be inadequate, as the reinforcements from Wilhelmshaven could leave too late due to the low tide to take part in the battle. From then on, some capital ships were kept in readiness on the tide-independent Schilligreede outside the Jade Bay in order to be able to intervene as quickly as possible in the event of further British attacks.

Far more severe than the ship's losses, however, were the psychological consequences. After the loss of the small cruiser MAGDEBURG in the Baltic Sea on August 26, the defeat at Helgoland was the second serious setback for the Imperial Navy within a few days. In response, the chief of the admiralty's staff, Admiral von Pohl, on behalf of the emperor, significantly restricted the high seas fleet's room for maneuver. Further losses should be avoided at all costs. This was especially true for the capital ships. Instead, the German naval leadership continued to pursue the goal of a balance of forces. German battleships were only to be used after the British Grand Fleet had been weakened by sinking. Therefore, every naval operation in the future required the personal consent of Kaiser Wilhelm II.

At the same time, as a reaction to the British blockade, the German naval command used submarines against the Allied merchant shipping from autumn 1914. It was hoped that this would cut off Great Britain's supply of raw materials. In order to improve the chances of success of the submarines, the German naval war command switched to the so-called "unrestricted submarine war" in February 1915. From then on, all merchant ships found within certain restricted areas were attacked without warning. After the sinking of the British passenger liner LUSITANIA, killing 1,198 people, including 120 American citizens, unrestricted submarine warfare was temporarily suspended to prevent the USA from entering the war.

In January 1916, Admiral Reinhard Scheer took command of the German deep-sea fleet. He sought a more active role in naval warfare for his battleships. On May 31 and June 1, 1916, the Skagerrak Battle, measured by the number of ships involved (258), was probably the largest naval battle in world history. The goal of the Germans to decisively weaken the Royal Navy and thus to force the lifting of the sea blockade was not achieved. The battle off Jutland ended without a clear winner and Germany placed all hopes in unrestricted submarine warfare.

The outcome of the war is known: on November 11, 1918, the German Reich signed the armistice, which generally marks the end of the war. In accordance with the provisions of the armistice, the German Reich had to hand over all submarines to the victorious powers and internment a large part of the deep-sea fleet in the bay of Scapa Flow. There, on June 21, 1919, the German warships were sunk by their crews themselves in order to prevent them from being finally handed over to the Allies as reparations. This was the inglorious end of the German dream as a sea power (summarized: Witt and Jentzsch 2016). 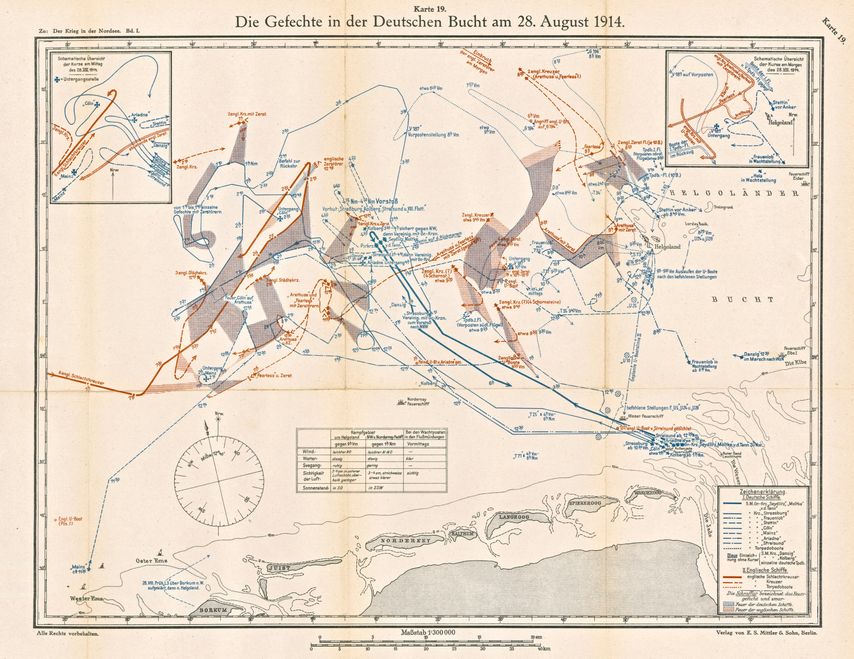