How does the Hotmail spam filter work 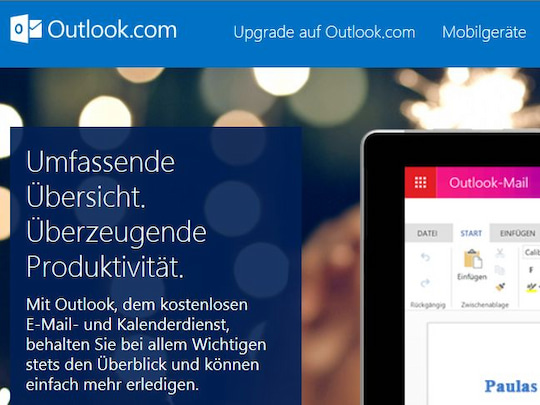 The Outlook.com home page
Image: Microsoft Outlook.com has replaced the previous Microsoft freemail service Hotmail for over four years. The service can be used web-based, with e-mail programs and apps on the smartphone. This year Microsoft started moving the service to the Office 365 platform. Apparently, Microsoft is currently having major problems programming a functioning spam filter for the service.

For some time now there have been discussions about the spam filter in the Microsoft forum, which have flared up again since the move to the Office 365 platform. The core problem: the spam filter cannot be completely deactivated by the user, and incorrect programming by Microsoft can lead to the loss of important e-mails. It appears that mostly newly set up accounts are affected.

Even emails from Microsoft end up in the spam folder

Mails in the junk folder are automatically deleted after a certain period of time. According to the users, this includes far too many emails that are actually important and not spam. Microsoft's forum responses to the matter do not seem to be of much help. On the old platform, some users managed to set a filter that says that if an email in the spam folder contains the @ sign, it should be moved to the inbox. However, this filter apparently no longer works on the new Office 365 platform.

For months, users have been telling Microsoft to make the much too rigid spam filter completely switchable by the user, but Microsoft is not giving in. The only possible setting is as follows: The user can either select the standard level, and then, according to Microsoft, "most" of the junk e-mails will be stored in the spam folder. Or the user defines the "Exclusive" level, then only messages from contacts in the address book and from mailing lists that have been defined as secure will be allowed through to the inbox.

The problem is that this mechanism doesn't work either. Users report that at the standard level they have created an extensive whitelist of addresses whose mails should be in the inbox - nevertheless these mails end up in the spam folder. The icing on the cake is that even service e-mails sent directly by Microsoft end up in the spam folder, even if a user has added the sender address to the whitelist. One user reports that he whitelisted 200 domains and 300 email addresses without doing anything. Apparently Microsoft has programmed the mailbox so that Microsoft's own spam filter strikes first and only then the users' whitelists are used, which makes little sense in practice. For some users, up to 20 percent of the desired emails end up in the spam folder.

Lawyer Matthias Böse from the law firm Husemann & Partner advises teltarif.de that such an incorrectly configured spam filter, which cannot be turned off by the user, can have dire legal consequences:

The risk: Mails in the junk folder are automatically deleted after a certain period of time. If you go on vacation and cannot sort your mails, you run a high risk. Jurisprudence considers emails that end up in the spam filter to have been received, which can also result in legal disadvantages for users.

The defendant cannot exonerate himself from the fact that the e-mail from May 23, 2011 allegedly did not arrive in his e-mail inbox, but was sorted out by the spam filter. The defendant did not take the necessary care in dealing with traffic because he did not check his spam filter on a daily basis. The defendant lists the e-mail address ... @ ... on his letterhead and thus makes it available as a contact option. It is the responsibility of the defendant if he provides an e-mail address for receiving e-mails that the e-mails sent to him reach him. When maintaining a business e-mail account with the spam filter activated, the e-mail account owner has to look through his spam folder daily in order to retrieve e-mails that were accidentally rejected as advertising.