What is a tarantula food chain

Invertebrates are often at the bottom of the food chain. Beetles, spiders and worms are on the menu of many birds, reptiles and mammals. But there are exceptions. One of them is the giant tarantula.

As the name suggests, it is something larger than the garden spider at home. With a body length of almost 12 centimeters and a leg span of up to 28 centimeters, it is larger than a guinea pig. So it is hardly surprising that this eight-legged predator occasionally chases somewhat larger prey.

While feeding primarily on insects, worms, and amphibians, the spiders have also been seen in the wild as they ate frogs, toads, lizards, rodents, and even snakes. 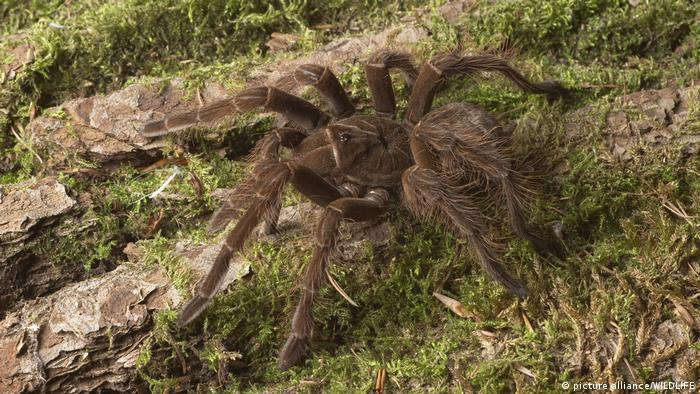 The giant tarantula, also known as the Goliath tarantula, is the largest living spider in the world

While the spiders tend to steer clear of us humans, they have long been caught and eaten by indigenous peoples in the northern Amazon region, where they live. They supposedly taste like crab or lobster when cooked.

When cornered, giant tarantulas can get quite aggressive. Their venom is not fatal to humans, but the animals have bite claws that are over two inches long. This means that their pearly whites are longer than the canines of many dogs. And yes, as a last resort, they also bite people.

More on this: This is how a spider man gets sex and survival under one roof

If you leave them alone and nobody tries to cook them, the big crawlers can live quite a long time. Females reach a proud age averaging 15 to 25 years. That's longer than most dogs or cats.

And they have a gentler side too. The love life of spiders is a delicate affair that often ends badly for male suitors. It is different with the giant tarantula. In contrast to some of their conspecifics, the much larger females are comparatively big-hearted and usually do not eat their partner after sex.