Why Python is so popular

Programming languages ​​come and go. A few, like C, C ++, C #, and Java, stand the test of time. A language that emerged in the late 1980s / early 1990s is at the top of the programming language charts. In fact, in November 2020, Python landed at number 2 on the Tiobe index for programming languages, ahead of languages ​​such as Java, C #, C ++ and Visual Basic. To be fair, it has to be said that Python fell back to third place in December, as Java was again just ahead of Python.

There are many reasons why Python is so popular. This includes the ability to use multiple programming paradigms. It can be used in both object-oriented and structured programming models. It also has the ability to support functional, aspect-oriented, logical, and other programming models. One reason for this support for a wide range of approaches is that Python was developed in such a way that it is highly extensible and at the same time should be compact.

Python was also made to be fast. This also means that elements can be removed when they are not needed in order to speed up the final programming result.

Python works on multiple platforms including Mac OS X, Windows, GNU / Linux, and Unix. Builds have also been made for mobile platforms, including Android and iOS. It is free to use and can be expanded under open source licensing.

As a programming language, Python supports a large number of core functions. The language includes the standard basic data types, which range from numbers to strings, but also elements such as lists and dictionaries. Data types can be typed strongly and dynamically, and the language throws an exception if you try to mix types. As an object-oriented language, it supports classes, multiple inheritance, and more. The language contains exception handling and supports automatic memory management.

As you can imagine, Python must be installed on the system before it can be used. This is the case with almost all GNU / Linux distributions. To check if you have a Python interpreter on the system, just type 'python' or 'python3' into a command window and look at the output. If Python is already installed, you will get an output with the version number:

Once it is clear that Python is running on your system, you can enter and execute simple commands in the interpreter. Python is an interpreting language in contrast to pure compiling languages ​​such as C. This means that commands and entire programs can be executed immediately without having to compile them beforehand. Python commands can be entered after the command prompt (>>>), such as the classic 'Hello World':

But more sensible commands are also possible on the command line. Here are some examples: 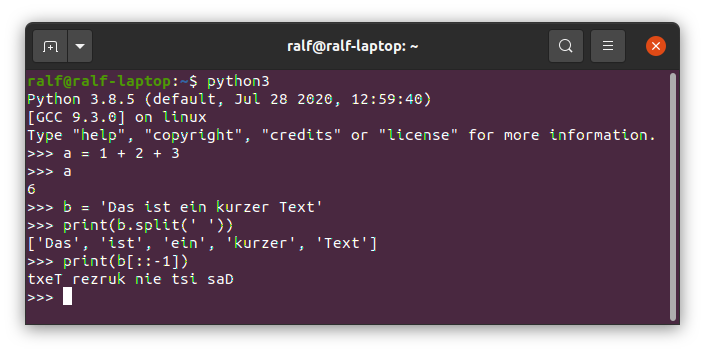 The use of the interpreter on the command line is only suitable for simple commands, but is very useful for quickly trying out certain commands from a larger program. Anyone who wants to write real applications will want to write the Python code in a text editor or a development environment. The demands grow with the tasks. You can start with a simple text editor, work your way up to a small IDE (Integrated Development Environment) such as Geany, and then end up with a large IDE such as VS Codium.

But why is Python so popular?

I have already answered some of the answers to this question in the first chapter. But there are more reasons why Python evolved into the forest-and-meadow programming language:

If you are interested in programming, but have not yet dared, or were unsure how to start, Python is the right place for you. This guide is a good place to start.