CB Radio was the first to social media

With the smartphone it is now possible to communicate from almost anywhere in the world. Be it by phone, SMS, email or WhatsApp to social networks: the possibilities offered by communication via cellular networks are almost inexhaustible. And yet there are still CB radio operators and licensed radio amateurs who talk to one another - often with significantly poorer transmission quality than via mobile phones.

But what is the attraction of using a CB radio in the car, at home or as a mobile handheld radio or even taking the amateur radio test in 2021? Well, on the one hand there is "sporting ambition". With a hobby friend who is in the same place, the connection should also be established with simple means. If a greater distance has to be bridged, then it gets more complicated - but especially when it comes to amateur radio, it is feasible to speak to colleagues in Cape Town, Tokyo or Los Angeles without using traditional telephone networks or the Internet. 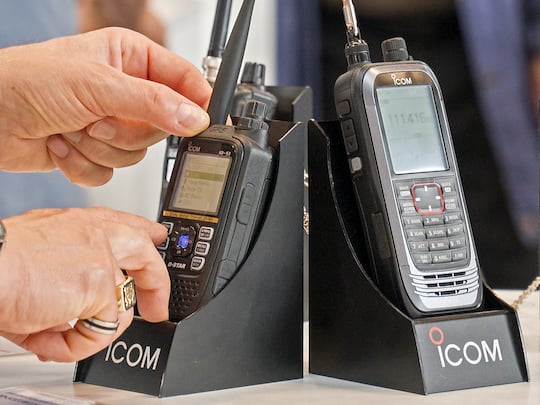 Icom handheld radio
Photo: HAM Radio, Messe Friedrichshafen But of course there are also situations in which classic mobile radio is not available. Do you remember the major power outage in Berlin-Köpenick in February 2019? Telephones remained silent for 31 hours, the Internet stopped working, and the refrigerators and freezers also failed. The cellular networks quickly failed. Rechargeable or battery-operated radio devices could still be used - for example to call for help if necessary.

In order to be able to use amateur radio, a license is required, which can only be obtained after an official examination in (electrical and radio) technology and legal and regulatory knowledge. The wage is an official, internationally valid call sign, which is issued by the Federal Network Agency and costs a certain annual fee. If you are technically interested and informed, you shouldn't have any problems here, if you come across this hobby "outside the field", you have to learn a little, but it can be done. We will shed light on more details in the course of the article.

With CB radio, on the other hand, there is a general allocation (approval) for everyone (and women), no testing or registration is required, only the devices must be certified (i.e. approved). We'll be on the details later.

There is no dead zone in amateur radio

And then there are the dead spots - regions in which the classic cellular networks are not even available. If you just want to chat with friends and acquaintances or want to help in an emergency, you can also use your radio here - regardless of whether it is at the Isenach pond near Bad Dürkheim, in the southwest African Namib desert or in the middle of the Andes South America is.

Anyone interested in amateur radio must take an exam at the Federal Network Agency in order to get a license. Associations such as the German Amateur Radio Club e.V. (DARC) help with the preparation. The cost of the exam is between 80 and 110 euros - depending on which license class you choose. In addition, there is a further 70 euros for the license certificate and the allocation of the call sign, which is unique in the world and through which the radio amateur can be identified (something like the radio operator's "telephone number"). Every year there are additional costs of around 30 euros for frequency usage and as an EMC contribution (electromagnetic compatibility).

In Germany there are amateur radio classes A and E. Class E is intended for beginners and the interested party only has to prove basic technical knowledge during the license examination. For this he is only allowed to transmit with a maximum power of 100 watts. Advanced users with appropriate technical knowledge can acquire the class A license and work with an output of up to 750 watts.

Amateur radio on shortwave and VHF

According to DARC, there are around 2.8 million licensed radio amateurs worldwide. These can use nine shortwave bands, but also the 2-meter and 70-cm bands and even higher frequency ranges for communication. In addition to conversations that are similar to the push-to-talk that was also used in mobile communications around 2005, telegraphy, radio telex and even TV test broadcasts are also possible. Similar to WhatsApp or Telegram, there are also amateur radio groups that "meet" regularly on a certain frequency to exchange ideas.

If a direct connection to the desired conversation partner is not possible, it may work via relay stations that hobby friends set up in exposed locations to enable communication when this would not actually be possible for physical reasons. However, there are also constantly changing propagation conditions, especially on shortwave. A conversation that is possible today may never work again, or it will only be possible to reach the hobby friend again in a few months or years. 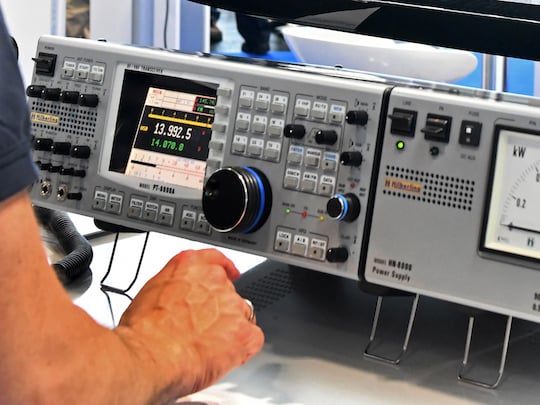 Professional amateur radio transceiver
Photo: HAM Radio, Messe Friedrichshafen At 2 meters and 70 cm there are similar over-range effects as we know them from VHF and DAB + radio. So it may be possible for many hours or even just a few minutes to communicate with a hobby friend who would normally not be available. If the connection is established, the radio amateurs confirm this with so-called confirmation of receipt cards (QSL), which contain the callsign, date, time, frequency and operating mode of the connection.

That's the secret behind the Q-Code

Apropos QSL: The radio amateurs worldwide have agreed on a kind of "secret code" in order to be able to communicate with each other even when the connection quality is not that good. Abbreviations are available via this so-called Q-Code, which are often easier to understand than completely formulated sentences.

Sounds complicated? But it is only at first glance. Finally, you can quickly find helping "OMs" (= hobby friends) who initiate a newcomer into the secrets of the amateur radio world. At the latest after the containment of the corona pandemic, the numerous OV evenings (regulars of local associations of amateur radio clubs) will take place again, where you can exchange ideas with like-minded people in a cozy round in the restaurant or clubhouse.

Often there is also an amateur radio club station available in such a clubhouse, at which all hobby friends can work. Depending on the location, this equipment offers significantly better transmission and reception conditions than the shack at home (= hobby space in the apartment). This is also due to the fact that fluorescent tubes and LED lamps, plasma screens and powerline adapters can lead to massive radio interference.

This is what the CB radio offers

CB is the abbreviation for Citizen's Band, in German Bürger Band or Jedermannfunk. Every man and woman can operate CB radio. This requires a "certified" radio with a suitable antenna and power supply. A microphone is either included or already built in. For CB radio, there are handheld radios (short range), mobile devices (installation in the vehicle) and fixed stations for at home, which can also be used as mobile devices with power packs (typically 12 volts). 80 voice channels are approved for CB radio in Germany, the type of voice transmission can be FM (frequency modulation), AM (amplitude modulation) or even SSB (single sideband).

CB radio is often used by long-distance drivers ("truckers") who exchange information about the traffic situation, the cheapest truck stops and many other things related to work and possible hobbies. You can find them in German mostly on channel 9 AM (= 27.065 MHz), internationally on channel 19 FM (also in English). Polish truck drivers like to use channel 28 and colleagues who speak other languages ​​can be found on other channels. 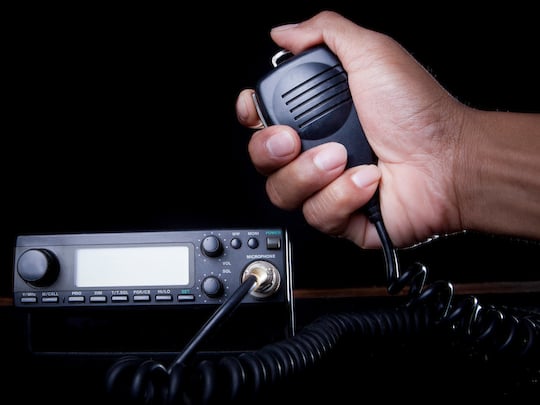 CB radio device
Photo: Image licensed by Ingram Image No license check or approval is required to operate CB radio. It is advisable to listen in at the beginning and get your own radio call name ("skip name") - something that is easy to understand and is not yet in use in the area. For the CB radio you also need a suitable antenna - as for the amateur radio. When setting up the antenna for the first time, the standing wave ratio must be measured. If another radio operator is nearby, he can certainly help.

This is how large the range with CB radio is

The most frequently asked question is the range.CB radio takes place in the 27 MHz (short wave) range and here the propagation conditions change depending on sunspot activities. In exceptional cases, unbelievable ranges are possible, to southern or northern Europe or even overseas. Normally, you can cover one to two kilometers in the city with a handheld radio, two to five kilometers with a mobile device and five to ten kilometers with the base station. If you drive up a mountain, a range of 20 to 100 km is not uncommon.

In the past, CB radio was also used by pensioners or housewives to exchange ideas. The Jedermannfunk is, so to speak, the previous version of social media such as Facebook, etc. No fees have to be paid for CB radio. When buying a CB radio, there are some papers in the box that you should have with you while driving, it is about the certificate of conformity. In Germany, certified (approved) devices may be used on a maximum of 80 channels and a maximum of 4 watts of power.

Anyone who joins the CB radio should encourage their friends and acquaintances to take part. It's just more fun with regular radio contacts. And one more thing: communication via CB radio is open. Anyone who has a CB radio can listen - even if he or she is not actively involved. Disclosing secrets is therefore not recommended. There is the "600 Ohm" for that. This is the CB term for the good old phone.

Where can I get the devices?

Devices for CB or amateur radio are available from specialized radio retailers, but also on relevant sales platforms such as Amazon or Ebay. The latter are not recommended for beginners, as there is a high risk of catching a device that is not approved in Germany and causing problems at customs (if it is imported from outside the EU) or with the radio measurement service of the Federal Network Agency (because it is radioing on non-approved frequencies ) gets. Although "black spark" is no longer a criminal offense, it is an administrative offense that has to be paid for. That is why you should contact a radio dealer beforehand and seek advice or look around and find out more in the relevant forums.