Why is sulfur important for the body 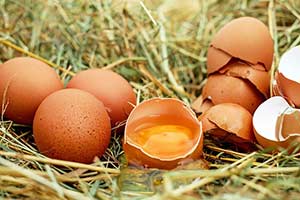 Sulfur is a chemical element and also an important mineral for the human organism and its processes. For the human body in the areas of metabolism, but also important for detoxification, health problems can still arise in the event of an excess.

Sulfur with the chemical abbreviation S is found in many foods that people eat every day. Contained in amino acids, the body's own proteins are produced here.
Which foods contain this mineral exactly, how high the daily requirement is, which symptoms can occur in the event of a deficiency or an overdose and all other important information on the subject can be found below.

What exactly is sulfur?

Sulfur is a lemon-yellow, odorless and tasteless non-metal. Under the Latin name Sulfur, it is not only a chemical element, but also a mineral that plays a major role in human metabolism and also in detoxification.

As an important component of amino acids in the human organism, sulfur cannot be produced by the body itself, but is in most cases ingested through food.

These foods, in which the body consumes the important mineral, are protein-rich foods. Since sulfur is involved in a number of important processes in the body, it is found in enzymes, skin and hair, for example.

The body forms important substances from the protein building blocks so that the construction and restoration of human cells can always be guaranteed. It is important that all trace elements and minerals, as well as sulfur, are present in sufficient quantities in the body to maintain all important processes, such as the metabolism and thus all body functions.

In origin, sulfur has a powder-like consistency and can be found in many rocks on earth. Since the human body is not able to synthesize this mineral itself, it is consumed through food for important processes such as metabolism. As a central component of enzymes and amino acids, this then takes care of the necessary metabolic processes.

With the help of sulfur cells and tissues are built up in the human body, the immune system is strengthened and hormones and enzymes are produced. With the help of the amino acid cysteine, the body can produce structural proteins that are so firm that hair, nails, skin and also the connective tissue maintain their firm structure. 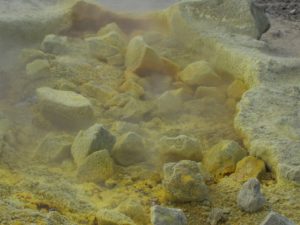 But sulfur is not only important for many processes in the organism, the mineral is also used in diseases and disorders in the human body as so-called methylsulfonylmethane, or MSM for short.

This biological sulfur is used by doctors in the therapy of

used and also works against inflammation and in lowering blood sugar. About 0.2 percent of the human organism consists of sulfur.

Sulfur is a chemical element. The ancient Chinese and Egyptians already used it to bleach fabrics, but also for disinfection. The mineral occurs in many layers of the earth and is versatile and often especially in the biosphere, but here in a reduced form. When biomass is broken down by enzymes and microorganisms, hydrogen sulfide is then released from the organic substances.

Sulfur is obtained from 2 forms. On the one hand from elemental sulfur, which is further processed into sulfuric acid, or on the other hand by roasting sulphide ores with the sulfur oxide. The mineral of the elemental kind is extracted worldwide. The human body mainly takes in sulfur through food.

Foods are particularly rich in sulfur, such as

but also nuts and meat. Vegans should use potatoes, seeds and legumes for the required sulfur intake by avoiding animal products.

Properties and optimal values ​​of sulfur

The organic sulfur compound methylsulfonylmethane is a vital element in the human body. As one of the most important nutrients, the mineral in its presentation is 40 times higher than, for example, iron.

As an indispensable component of enzymes and hormones, sulfur not only strengthens the immune system, but also contributes to the important build-up of protein.

The normal sulfur level in the blood is determined indirectly via the detection of sulfur-containing amino acids. The most important one is homocysteine. As an intermediate product of cell metabolism, the normal value in an adult is 6-12 µmol per liter.

Sulfur is e.g. B. contained in eggs & milk

Who uses how much sulfur per day?

There are no specific guidelines for the amount of sulfur consumed per day. Approximate estimates give an intake of 500 to 1,000 milligrams a day. Already in protein-rich food, combined with a balanced lifestyle, the need is covered without additional preparations.

In industrialized countries, nutritional sulfur deficiency is not to be expected. In poor and famine-plagued countries, however, these minerals are missing and can also lead to significant deficiency symptoms such as growth disorders, skin inflammation or nail problems.

Diseases or disorders related to the mineral is always a disorder in the amino acid metabolism. If amino acids are missing or if they cannot be absorbed in sufficient quantities, certain processes in the body can no longer or not fully be carried out. This in turn can damage tissue or organs.

Since sulfur is found in sufficient quantities in protein-rich foods, the best prophylaxis against sulfur deficiency is and remains a balanced protein-rich diet. Especially nowadays there are a large number of foods containing sulfur, so that a deficiency symptom is not to be expected.

Side effects of overdose

Pure sulfur is not harmful to the human organism. However, there are a number of compounds that can lead to pathological changes in the body. For example, they can inhibit or even cancel the effect of enzymes and intensify the effect of carcinogenic substances.

Since hydrogen sulfide and sulfur dioxide are gases, an overdose can irritate the airways and cause coughing, nausea and even vomiting. In the event of poisoning, the person concerned must be given fresh air and oxygen immediately.

An excess of sulfur can be triggered by large amounts of foods that contain sulfur or foods that have been preserved by sulfur. This inhibits enzymes, which then present themselves with headaches, nausea, bloating and diarrhea.

Intolerance and allergic reactions to sulfur compounds are also possible and can even trigger asthma attacks. With a healthy, balanced diet, however, it is hardly possible that there is an overdose, since a person hardly consumes so many foods containing sulfur or in products preserved by the mineral that trigger an excess.

Please recommend this page or link us:
<?