What is a shark 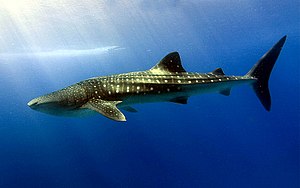 A whale shark in the Indian Ocean. This shark is the longest and heaviest of them all.

The body structure of a shark

Sharks are fish that are at home in all of the world's oceans. A few species also live in rivers. They are predatory fish: most of them eat fish and other marine animals.

When sharks swim on the surface of the water, they can be recognized by their triangular dorsal fin protruding out of the water. Sharks swam through the sea 400 million years ago, which is why they are among the oldest animal species in the world.

Sharks have a special set of teeth: more rows grow behind the first row of teeth. If teeth fall out in a fight with other animals, the next teeth move up. In this way, a shark “consumes” up to 30,000 teeth in its lifetime.

The skin of the shark is not made of normal scales, but of the same material as the teeth. These scales are called "skin teeth". From the head to the caudal fin this skin feels very smooth, but the other way around it feels rough.

How do sharks live? 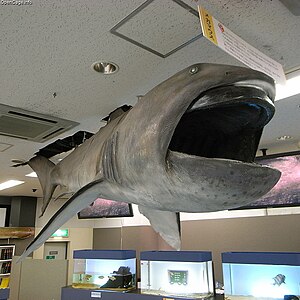 The basking shark is not dangerous because it only filters plankton out of the water.

Sharks are still poorly researched, so little is known about them. However, one special feature is known: Sharks have to keep moving so that they do not sink to the sea floor. This is because, unlike other fish, they do not have a swim bladder that is filled with air.

Most species of shark feed on fish and other larger marine animals. But just some of the largest shark species feed on plankton, which are small animals or plants that float on the water. Around five people are killed by sharks each year around the world.

Sharks have enemies: smaller sharks are eaten by rays and by larger sharks. Sharks are also on the menu of seabirds and seals near the coast. Orcas also hunt larger sharks. The sharks' greatest enemy, however, is humans with their nets. Shark meat is considered a delicacy, especially in Asia.

How do sharks get their young? 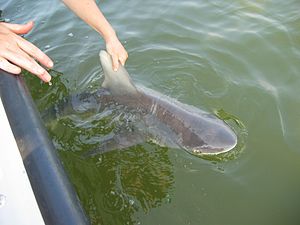 A young shark is released back into the sea after the examination.

Sharks take a long time to reproduce: some sharks have to be 30 years old before they can mate for the first time. Some species lay eggs on the ocean floor. The mother does not care for them, not even for the young. Many are already eaten as eggs or as young animals.

Other sharks carry some live juveniles in their stomachs every two years. There they develop from half a year to almost two years. During this time, they sometimes eat each other up. Only the strongest are born. They are then about half a meter long.

Many species of shark are critically endangered. This is not just due to humans and natural enemies. It's also because sharks have to get very old before they can even reproduce.