Which fountain pen did you use first?

Fountain pen
From the end of the blobs

Contracts, love letters, school essays - over the centuries, ink stains have ruined many letters. But over the years a sophisticated writing instrument emerged in Europe from a simple quill pen: the fountain pen.

With a quill pen in hand, Luther, Fontane or the archaeologist Johann Joachim Winckelmann ponder their next lines - this sight has survived for centuries on oil paintings. What the pictures don't reveal, however: how much trouble such an ink pen causes. Johann Wolfgang von Goethe, who wrote thousands of pages in his life, noted in a letter: “Ink certainly teaches us, but it annoys us where it doesn't belong. Written words are like pearls, an inkblot is a bad prank! "

Today the bright minds no longer have to fear defacing important documents with ink blots - thanks to the fountain pen. Schoolchildren write to him, as do presidents. His story runs in curved paths, almost like a handwriting.

Whether with the Egyptians, the Romans or the Copts: The reed pen, mostly made of reed, was the dominant writing instrument of antiquity. | Photo (detail): © picture alliance / Philippe Maillard / akg-images

Between the second and fourth centuries AD, people gradually began to use quills instead of reeds to disc. One of the first evidence of a forerunner of today's fountain pen can be found in the factoryDeliciae Physico-Mathematicae by the Franconian scholar Daniel Schwenter from 1636.

In it, the mathematician and professor of oriental languages ​​described a writing instrument that consisted of two quills pushed into one another. One keel was filled with ink and closed with a cork, the ink could be pressed through a small hole in the cork and got onto the paper through the second keel. 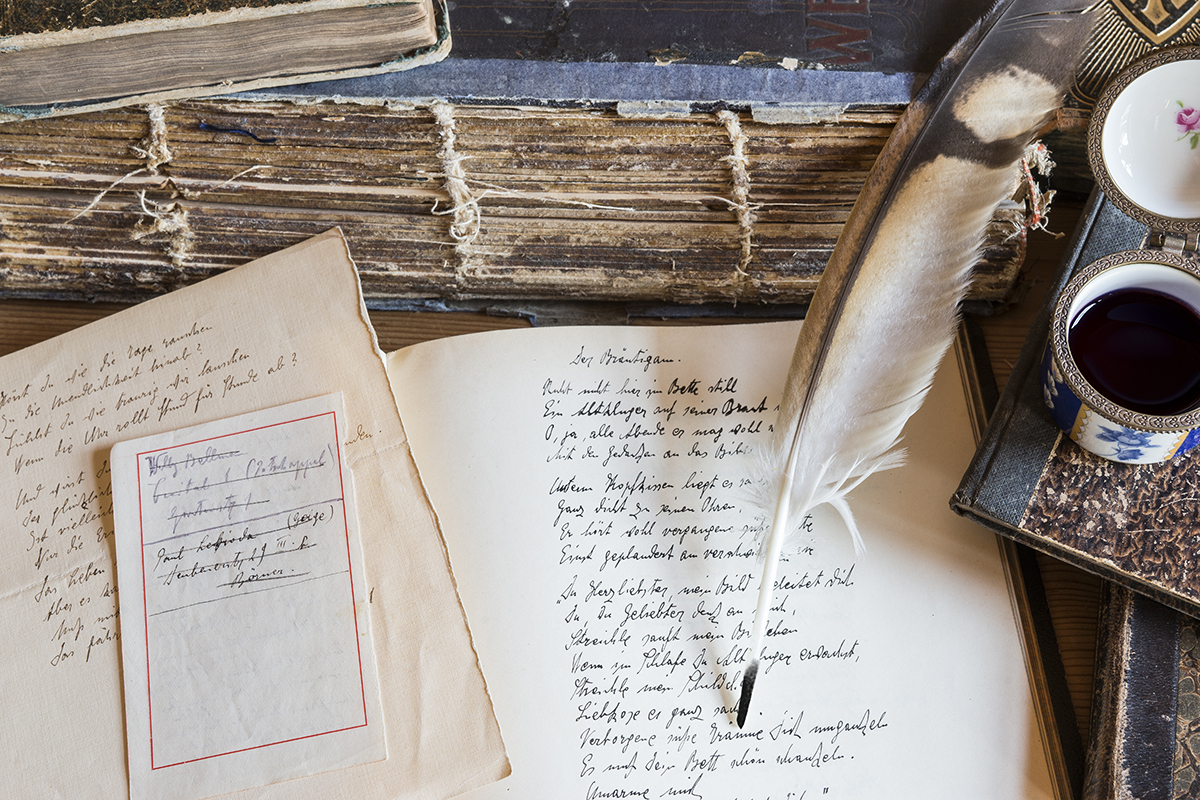 The quill pen replaced the reed pen - but using it was anything but a mess-free writing pleasure. | Photo: © Adobe
It would then take almost 200 years before the Romanian Petrache Poenaru patented the first fountain pen in France. Poenaru, who would later be responsible for building up the Romanian education system, studied cartography in Paris. In 1827 he was confirmed there that he had invented the "Plume portable sans fin qui s’alimente elle-même avec de l’encre" - a portable ink pen that supplied itself with ink using a built-in tank. Immersion in an inkwell was no longer necessary; But the invention was far from being spill-proof.

A little later, the Scot Robert William Thomson made a name for himself: Born in 1822 as the eleventh of twelve children, he was already noticed as a boy for his inventive talent. By the age of 17 Thomson had already developed a laundry iron, a band saw and a turntable steam engine. Posterity valued the invention of inflatable tires as his greatest merit, but even today's fountain pen might not exist in this form without his ideas: in 1849 Thomson applied for a patent on hisFountain pen, which he presented two years later at the World's Fair in London.

This fountain pen consisted of a tapered glass tube into which the ink could be filled, and a rubber insert that made use of the so-called capillary effect: liquids rise up in thin tubes - and Thomson had found a way to get the ink to the pen in a controlled manner bring.

With his invention, the Romanian Petrache Poenaru paved the way for the development of the modern fountain pen. | Photo: public domain (portrait) | CC BY-SA 4.0 (patent)

The rise of the fountain pen to a universal writing instrument was favored by three developments in the 19th century: First, hard rubber, which Thomson also used, was created, a resistant material that could be processed easily and for little money. Second, inks were developed with fewer contaminants, which no longer clogged writing implements. And thirdly, the nibs had been improved: unlike their predecessors made of steel or iron, gold nibs did not react with the ink and were soft enough to glide over paper. A tip made of iridium, a hard metal from the platinum group, prevented the spring from abrasion. The first companies in Germany began serial production, such as the manufacturers Friedrich Soennecken in 1871 and Koch / Weber in 1872.

A pelican on every desk

However, calligraphers still had to struggle with an obstacle: the ink did not flow evenly from the best fountain pens. The American Lewis Edson Waterman finally found a solution, and in 1884 he applied for a patent for a fountain pen with an ink pen in New York: TheWaterman Regularwas equipped with a connecting channel between the nib and the ink reservoir. As the ink leaked, air was drawn into the reservoir, preventing a vacuum in the tank from blocking the flow of ink. With that, the last blob hurdle was overcome - at least while writing.

The pens had to be filled with a kind of pipette, with which the ink was dripped into the tank. That only changed when the first ink cartridges appeared at the beginning of the 20th century and the Hungarian engineer Theodor Kovács invented the piston mechanism with screw thread in 1925. Kovács sold his patent to a German company: the Pelikan brand, which had already acquired the patent of the Croatian chemist Slavoljub Eduard Penkala for a fountain pen with solid ink. It did not begin with the production of fountain pens until 1929, but then with great success: every schoolchild in Germany knows the Pelikan fountain pen to this day, and in the 1950s it had a safe place on every desk. Until he got competition. But the story of the ballpoint pen is different.

A contribution from Germany